As Mary Worth whines to Broadway has-been Ken Kensington about how she misses New York’s “former charm,” let’s do a little age-math, shall we? I have a strong memory (though I can’t find it now) of some official or semi-official King Features source describing Mary as “perpetually 60.” Maybe she’s a little older, but surely not past her mid-60s. Mary has said earlier in this storyline that she used to live in New York when she was a young woman; again the dates are fuzzy, but we can say with relatively certainty that this period in her life was somewhere between 30 and 40 years years ago. The years from 1973 to 1983 were, of course, the Taxi Driver/Bernie Goetz era in New York City, so you probably need to rethink whatever you were imagining when Mary wistfully recalled the city’s “former charm.” Presumably she’s one of those people who can’t go through Times Square without muttering about how it looks like a God-damn mall now that that asshole Giuliani shut down all the porn theaters. “After your experience with that mugger, it may be hard for you to agree!” “I’ll be okay, Ken. I’m shaken … shaken by how half-assed that mugging was. What self-respecting New York City thug would just give up when confronted by a portly actor? Why aren’t I lying dead in a puddle of my own blood right now?” 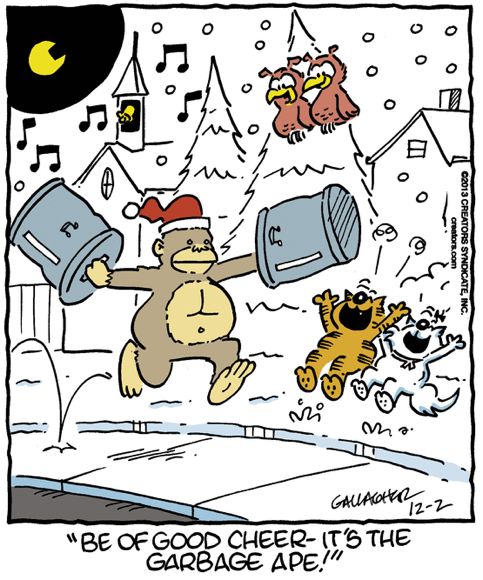 How exactly are those lids staying on the trash cans as the Garbage Ape swings them to and fro? Don’t those owls look like they were just cut and pasted from another drawing and plopped onto a picture of a pine tree without regards for what exactly might be holding them up? I hate to say it, but rampant Garbage Ape mania has upped the demand for this lovable/mysterious character so much that the strip is churning out some slapdash art to keep up.

Article 115 of the U.S. Military Code of Justice, “Malingering,” says that “Any person subject to this chapter who for the purpose of avoiding work, duty, or service feigns illness, physical disablement, mental lapse or derangement … shall be punished as a court-martial may direct.” So, good news for everyone who ever wanted to see Beetle Bailey locked up in a military prison. Camp Swampy is clearly not a “hostile fire pay zone” but I’m guessing that the military still considers us to be living “in time of war” for legal purposes, so he’s looking at three years of hard time! 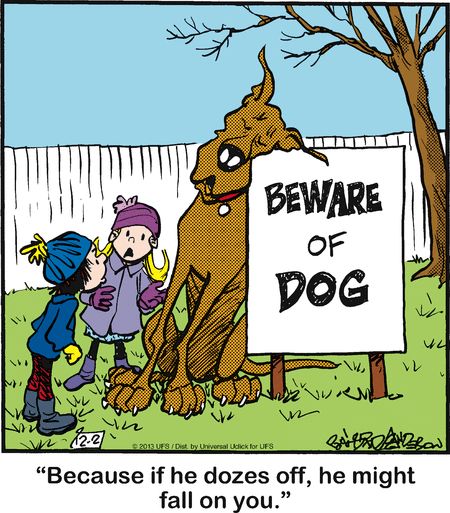 Ha ha, look at how terrified that little blonde child is! “He’s heavy! So heavy! Heavier than anything alive from our space-time continuum has any right to be! You’ll die in agony, your bones crushed to powder under a pile of impossibly dense meat, all while he sleeps his ancient, dreamless, uninvaded sleep!”

“I don’t think it matters that we live in a world where mysterious, incredibly skilled black ops troops with no obvious allegiance to any nation-state can swoop into anywhere in the world, with tactical data gained from omnipresent and near-omniscient surveillance tech, and snatch up anyone they want, killing dozens of insurgents, criminals, and terrified bystanders in the process! Just don’t worry your pretty little head over the fact that unimaginable military power will protect you, so long as some member of the ultra-rich mega-elite takes a shine to you and orders your rescue on a whim! The important thing is that Ross is safe! You know, for now.”