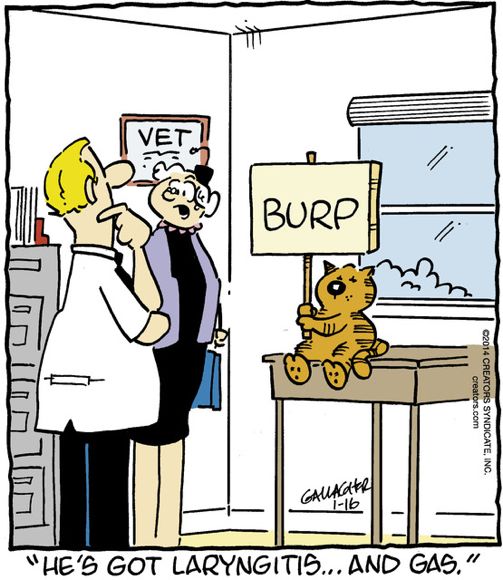 IMPORTANT HEATHCLIFF NEWS, EVERYBODY! America’s second-favorite orange comic strip cat who’s kind of a dick is matching arch-rival Garfield by securing a CGI/live-action movie deal, and then one-upping the Monday-hating indoor-only layabout by also snagging a 13-episode animated TV series, both from “family-based production company Waterman Entertainment”. The news is on actual film industry insider blog Deadline Hollywood, so you know it’s true! Where “true” means “a Hollywood shell corporation has acquired the intellectual property rights necessary to create the aforementioned entertainment units, but actual filming is dependent on nailing down funding and will happen sometime between five years from now and never.”

There are definitely narrative difficulties in bringing Heathcliff to the big/small screens, and today’s panel offers a good example. No, not the burp joke; the entire 21st century film industry is built on burp and fart jokes. I refer instead to Heathcliff’s mute nature, which combined with his apparent literacy results in him holding up signs and flying flags inscribed with various messages. How will movie and TV viewers deal with a non-talking protagonists? Heathcliff artist Peter Gallagher earnestly told Deadline, “We want our existing fans to identify with the characters they know while introducing him to an entirely new audience. As a creator I know that [Waterman Entertainment] will be attentive to our lasting vision for the brand and welcome our input, which is very important to me,” which pretty clearly means that they won’t change a facet so central to the strip’s history as Heathcliff’s inability to spehahaha I can’t even finish that sentence because obviously they’ll just get some mid-range actor who needs work to do the voice, like they got poor Owen Wilson to do Marmaduke. Who’s going to voice Heathcliff, do you think? Chevy Chase? Chris Tucker? Owen Wilson again, because why not?

Oh, whoops, Mary isn’t freaking out because she drank Lena’s coffee; she’s drinking Lena’s coffee because she was already freaked out. I’d complain about the strip just showing us a bunch of people sitting around talking instead of actually depicting the events being described, but, you know, I’m not sure I’d actually want to see a child almost get hit by a car in the comics, so let’s just let it slide.

Ha ha, it is very romantic, if by “romantic” you mean “a fairly glaring sign that your supposed beloved’s intentions are not what they seem.” Are Tommie and her mom being taken in by a handsome pair of con artists who will win the ladies’ hearts, gain access to their bank accounts, and then vanish into the ether after having spent the bare minimum of time with them? One can only hope!