SHOCKING DEVELOPMENT IN APARTMENT 3-G!!! No, not Tommie’s engagement — while the demands of plot stasis ensure that no A3G girl will ever actually get married, the ladies find themselves seriously involved and even proposed to with grim regularity, and so just numbers alone would make it inevitable that even poor dull Tommie would eventually attract a serious suitor. No, I’m just surprised that Tommie had the forethought to take her ring off before coming into the apartment in order to instill a little dramatic interest into her arrival, instead of just wandering in and mumbling something about marrying someone and hoping people notice her. Could it be that her new Italian fiance has schooled her in his people’s flair for the theatrical?

Not shocking: that Lu Ann needs to bring exciting conversation to a halt so that basic English words can be clarified. 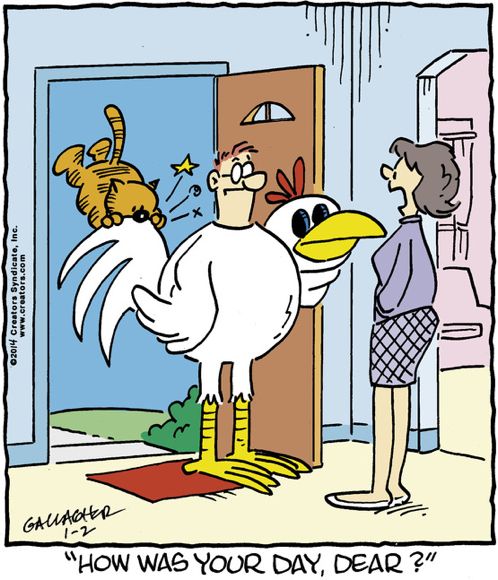 Sequences of non-language characters in comics — like ★@X, say — are often taken to represent pain being suffered by the body part from which they emit. However, since I assume that today’s guest star is a man wearing a chicken costume and not wrapped in living chicken-flesh as part of a ghastly genetic experiment, the pain in question is Heathcliff’s, a rare moment of our cat protagonist actually suffering from his insatiable appetite.

Kids! Did you know that before Marvel Entertainment and Lucasfilm were safely nestled together under the corporate umbrella of the Walt Disney Company, hilarious quips like the one Spidey lets loose in panel two could result in unnecessary and destructive lawsuits? If you’ve enjoyed today’s Newspaper Spider-Man, write your Congressional representative to urge a regulatory landscape that encourages further media consolidation!