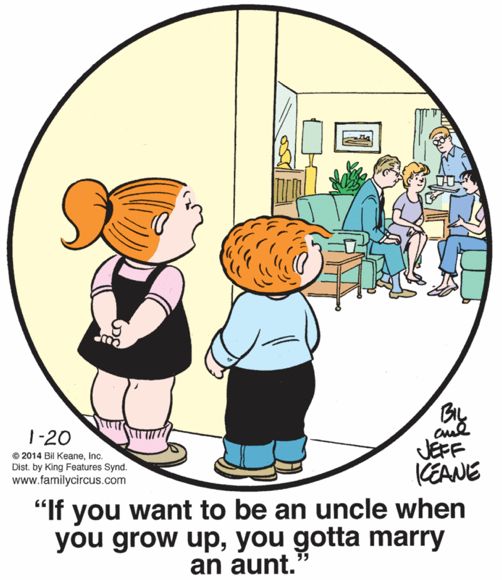 It occurs to me that, despite frequent appearances by grandparents and evidence that both Keane parents come from fecund stock, we never really see aunts and uncles or cousins come visit the Keane Kompound, so I guess I always assumed they were both only children? If these mysterious grown-ups in the living room were siblings and/or siblings-in-law of some sort, you’d think their adorable li’l nephews and nieces would be given free reign to leap and drool all over them, rather than be ordered to watch sullenly from thirty feet away. Thus, I’m forced to assume that these are just a couple of random adults, and Dolly and Jeffy are occupying their non-parent-annoying time with nonsensical and vaguely sexually weird idle chit-chat.

Wow, that clergyman looks awful smug in panel one, doesn’t he? “Ha ha, I love it when a couple gets all sassy and goes off script during a wedding! I’m pretty sure my 45-minute sermon created a ‘safe space’ for this kind of creativity.”

Snuffy’s been seeing maniacally grinning demons with his own face for days now, presumably because of the corn likker and/or meth.