Say what you will about this battle between the Amazing Spider-Man and a nefarious supervillain one of Iron Man’s obsolete and jury rigged armor suits controlled by a nefarious supervillain a local publishing magnate with the stakes being Spider-Man’s very life Spider-Man’s secret identity, but at least it represents recognizably superheroic activity, it’s lasted three weeks at this point, and Peter Parker hasn’t paused once to watch TV at any time during the process. But now it looks like 2014’s quota for action and excitement has all been used up, so Man-Bot is going to crash into that van in the most hilariously half-assedly drawn panel this strip has seen to date. Is Man-Bot suddenly as long as a van, even though previously it’s been shown as not much taller than an ordinary person? Is the metal of the van’s wall peeling outward, even though Man-Bot is punching through from the outside? Yes and yes, because why not and who cares! 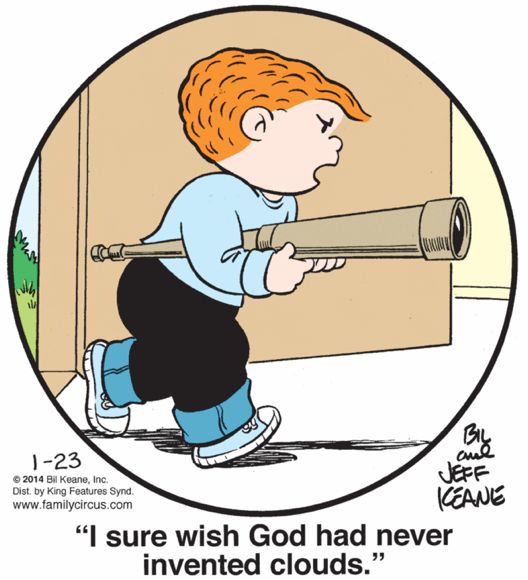 Oh, dear, it appears that Jeffy is really just asking for a good smiting from the creator God, is he not? Perhaps his family will be killed and he’ll be afflicted with boils and then God will serve up a long Book of Job style poem about how Jeffy doesn’t really know crap about creating a universe, hopefully with an sidebar about what lousy parents ostriches are. Maybe He’ll go with the ironic Twilight Zone method of enlightenment, eliminating all clouds (and therefore rain) from the Earth’s sky until everyone dies of thirst. Or maybe He’ll be more New Testament gentle, and just send an angel to patiently explain to Jeffy that without those clouds he would’ve blinded himself by pointing his telescope directly at the sun, what with it being in the middle of the day and all.