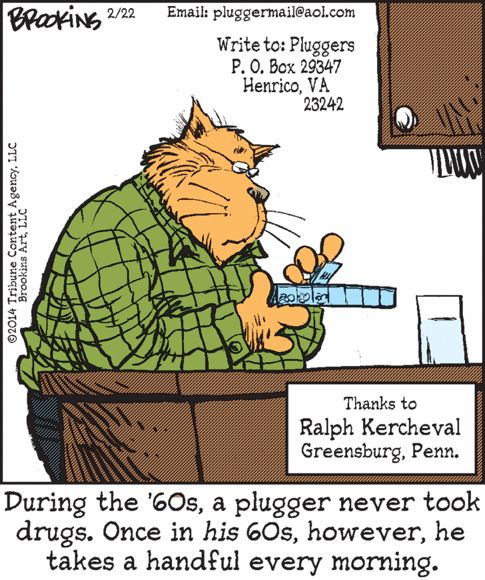 “Reflective” is not usually a term we normally associate with pluggers, but you have to admit that there appears to be a certain amount of self-reflection going through this plugger-cat’s mind as he stares at his pill container. Self-reflection and regret. “Boy, reefer and LSD sure seemed real scary back in college,” he thinks. “Seemed real important to keep away. These things are safer. That’s what they tell you. The government says so, so I guess it must be true. D’you think the guys who smoked grass are taking any more of these pills today than I am? Or the gals?” He thinks about a girl from his junior year, who had been in his math class — he never was very good at math, and she used to help him with some of the problem sets sometimes — and how he saw her at that party, and she smiled when she saw him and tried to hand him a doobie, or whatever they called it, and he stuttered and made an excuse and left, then avoided eye contact with her for the rest of the semester. What do you suppose she was up to? Did she have a daily pill organizer too? Did she ever get married? Was she on the Facebook? What was her name, again?

Blondie has been serving up non-stop Olympics jokes pretty much since the Games started, each cornier and more Olympo-sycophantic than the last, to the extent that I’m now just completely assuming that a fair amount of money changed hands between the International Olympic Committee and whatever Cayman Islands holding corporation owns the rights to Blondie’s intellectual property.

It’s Hagar the Horrible! He’s just like you, except that he lives in a anarchic, violent, Hobbesian hellscape.