Somehow, it ain’t like the old days, right everybody? It used to be that when someone said “boombox,” you had a pretty good idea what they meant: a luggable radio with a built-in tape deck, built as large as it could get while still being portable, so the huge speakers could put out really loud bass. But boomboxes have been out of favor for 20 years, so who even knows what that word means anymore, or what any word means, for that matter. Kids today and their slang and their polysemy make language a baffling morass. Is a boombox a metallic glove now? Sure, why not! 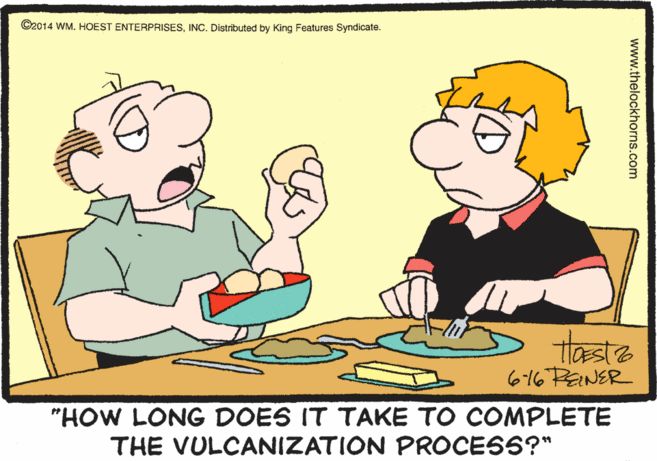 This joke, obviously, is some kind or riff on Loretta’s eggs (or maybe biscuits? what pairs with brownish goo that you need to eat with a knife and fork?) being so poorly prepared that they have the consistency of vulcanized rubber; nevertheless, my immediate assumption was that Leroy was referring to Vulcans from Star Trek, which makes sense because obviously the emotional hellscape of his failed marriage is something he desperately wants to escape by whatever means necessary. Perhaps he’s trying to put himself through the Kolinahr, the Vulcan monastic discipline under which the last vestiges of emotion are purged away. “How long does it take to complete the Vulcanization process?” he wonders aloud. “When will I become a creature of pure logic? When will these awful, awful feelings stop?”

MARK IS IN AFRICA, everybody, and by “Africa” we mean some nonspecific country in Africa where there is fine dining but also ladies who carry things on their heads. Mark is supposed to be meeting Jacob Hickman to save the rhinos, but Jacob Hickman has been kidnapped so Mark is just going to sulk at his hotel restaurant instead. “Now I’m stuck here! I’m bored! There’s nobody to punch!”