Here’s where I am with Funky Winkerbean, emotionally: I like it when the characters suffer. I mean, it’s going to happen whether I enjoy it or not, and for whatever reason I’m not going to stop reading the strip, so why not go along for the ride? It certainly helps that most of the characters are thoroughly unlikable anyway and therefore seem to deserve their fate; there tends not to be a direct connection between jerkwad behavior and suffering, but it’s nice to see everyone getting their karmic comeuppance.

What I don’t like is a particular and pernicious subset of Funkyverse suffering, which is when one of the characters suffers because he or she is simply too good, too righteous, for this fallen world. More often than not it’s the insufferably smug Les who earns this sort of martyrdom, which just serves to make him simultaneously more depressive and more self-satisfied. In this current plotline, Les is learning that when he sold the story of his wife’s painful death to a basic cable network for a substantial sum of money, he was expected to tailor the script to the conventions that the network’s audience has come to expect. Today, this sad-sack basic cable executive is explaining that, while Les is of course a great artist — perhaps the greatest artist who ever lived, though that’s a question for another time — everyone who runs and watches the cable network is a low-class garbage person who won’t be able to appreciate Les’s artistry. Les suffers, you see, but he suffers because he’s so much better than everybody else.

This plot would be enraging enough even if we hadn’t actually gotten a glimpse of Les’s script, which, it turns out, isn’t a beautiful work of art at all but rather a clunky tear-jerking slab of treacle with which he is far, far too pleased. But still, the important question remains: why aren’t people giving Les fat checks to write exactly the strain of sentimental death-porn that he wants to write, and then leaving it untouched, out of respect, even though everyone will hate it?

Interesting theory, Miss Blips, but that’s actually a crude depiction of Hexastom, the six-mawed hell-beast to whom you’ll be sacrificed at tonight’s coven.

Kids today, refusing to die for nothing in some pointless colonial war! Whatta bunch of losers! 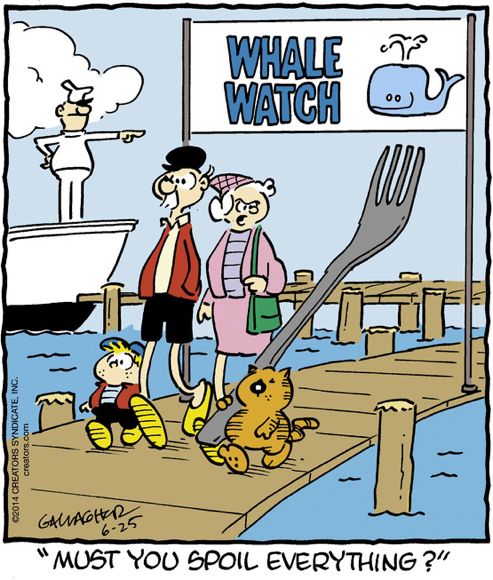 Heathcliff’s owner-lady just looks miffed over a fun family outing ruined. But his owner-man and owner-kid — well, that’s the stare of people who’ve seen some things. The bellowing of the majestic sea giants, the fast-moving fork with its razor-sharp tines, the violations of the International Convention for the Regulation of Whaling and basic decency, the blood, so much blood…