Oh my goodness that was so exciting! And now begins the eleventh blogyear — the second blog decade — of the Curmudgeonarchy. Look on these works, ye mighty, and despair ….

Despair especially upon reading today’s Apartment 3-G! After weeks of tedious passive-aggressive banter, Carol and Tommie finally bond over a prank that would embarrass a preschooler. Giggle-snort-guffaw, indeed, and I’ll raise you “chortle.”

It’s a mercy Tommie can’t hear the quotation marks when Luann and Margo tell people she’s the funny one. 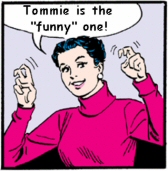 Speaking of despair, see how crestfallen poor Rexy looks as his daughter rockets past him into society’s uppermost stratum of privilege and influence. I’m betting those free cab rides and Shamu passes seem pretty shabby about now don’t they Rex, you pathetic bourgeois striver.

The key to compelling fiction is carefully detailed secondary characters. See, for example, how the lion’s rage and loathing are directed inward at his own cowardice, not at his feisty erstwhile prey. Let’s listen in! “Sure, Leo — run from the fucking giraffe, loser. Like he’ll neck you to death or some shit. ‘King of the Jungle’ my ass. Goddamn, warthog again tonight — Zuri’s gonna kill me.” And even at this great distance the reader can sense the vulture’s disappointment at the loss of its meal, disgust at the craven lion, and maybe a flicker of hope that Chris’s plan will save it from starvation? Of course, that assumes that the corpse of Mark Trail, all leather and sinew, could possibly be digested, even by a vulture, and even after a couple days rotting in the African sun. But hey, a bird’s gotta dream — fly high, vulture guy!

When Luann wants to disappear somebody, they put him on a plane. Longtime Luann crush Aaron Hill was exiled to Hawaii, but that has disadvantages of being still nominally in the US, so the disappeared one could theoretically keep in touch by phone. The technique was perfected for Miguel and one-shot “Sanchez” by sending them to Spanish-speaking countries. It’s perfect because not only are they outside the US so who cares, but if they did somehow manage to build a working telephone out of the native soot, feathers, and animal bones, we wouldn’t hear anything on our end but incomprehensible gibbering.

I’m super-interested in Gunther’s experience actually on his flight to nonexistence (OK, Peru, but c’mon). Will he just wink out once he crosses the border, or is it a gradual process of dematerialization culminating in technical nonexistence somewhere over, say, Quito? Can he feel the interstitial tissues of his internal organs relaxing their grip right now? What kind of Last Meals do they serve on a flight to Nowhere? He and Rosa are in Business Class (thanks, Mom — bye!), so will they get a couple dishes of those awesome hot nuts with their Diet Pepsis? Does Gunther save the cashews for last, and avoid the almonds entirely? Maybe, ever the gentleman, he gives Rosa his cashews and takes her almonds? It’s the least/last thing a fella can do.

Josh has withdrawn to his garret to finish his novel (tick-tappita tick-tapp tappita), so I’ll be here through Sunday the 27th. No fundraiser this time: thus your generous contribution will be an especially welcome surprise when we send it up in the basket with his sandwiches. If you have any technical issues with the site, reach me at uncle.lumpy@comcast.net. Enjoy!