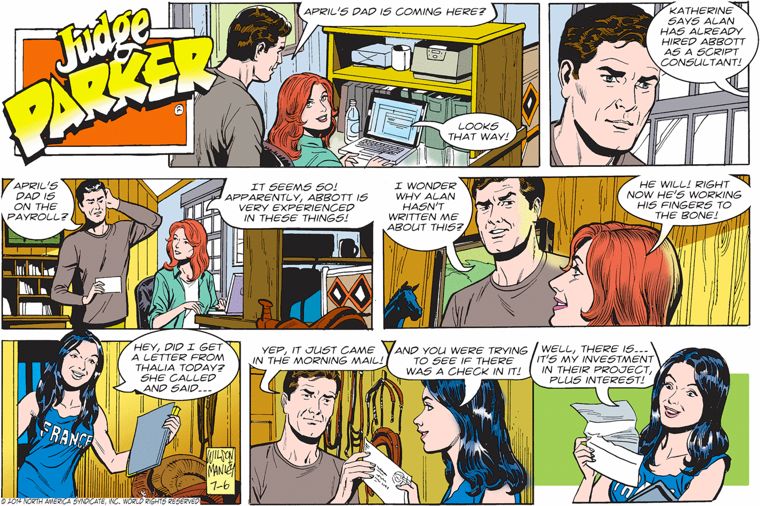 Oh boy oh boy, we’ve reached the best part of any Judge Parker storyline: the part where the smug, upper-crust protagonists get paid. Remember last year when Neddy befriended do-gooders Ross and Thalia and also invested in their dubious water filtration scheme, and Ross supposedly got kidnapped in Niger and it looked like maybe it was all a scam, but it turned out it wasn’t and our heroes were able to call in some shadowy black-ops extraction team to save him? Well, Neddy just got her first check for her trouble. Plus interest! Damn, it feels good to be a gangsta.

Speaking of gettin’ paid, remember how April’s dad Abbott had gone down to his heavily armed Yucatan jungle compound, to die? Well, apparently that’s for suckers, so he’s going to come back to the states and be Judge Parker Senior’s highly paid script consultant/the strip’s wacky neighbor instead. Come on board, Abbott! There’s room on this gravy train for everybody!

A good strategy for writing a comic strip is to take a joke your 10-year-old nephew heard in school, but then have one of your characters describe it, ashen-faced, as a terrible nightmare he had, to emphasize the intrinsic horror of the narrative. 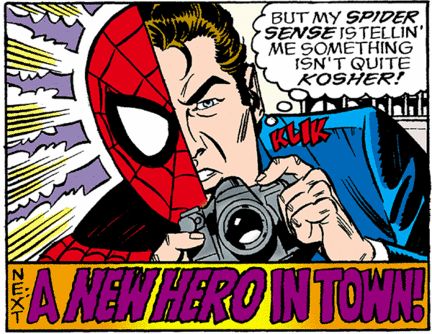 Now that Spider-Man has been displaced from his super-heroic role by Doc Ock, Peter needs to find new employment — so why not as a mashgiach? “Wait, was this cow butchered improperly? My trayf-sense is tingling!”