For a brief and horrifying moment I was pretty convinced that Momma had descended into full-on nightmare, with its elderly characters’ organs liquifying, leaving them nothing more than wrinkled skin-bags waddling around full of audibly sloshing viscera-slurry. But now I think that maybe this is a pants-wetting joke? Old people have problems with incontinence? Ha … ha? Never have I grasped onto the possibility of an incontinence joke with such desperation.

Generic Customer Guy is right to look so dubious about Herb’s dad’s advice. “So … you want me to relentlessly pursue a woman who made her romantic disinterest in me clear not once but twice? Sure, that can only end well for everybody.” 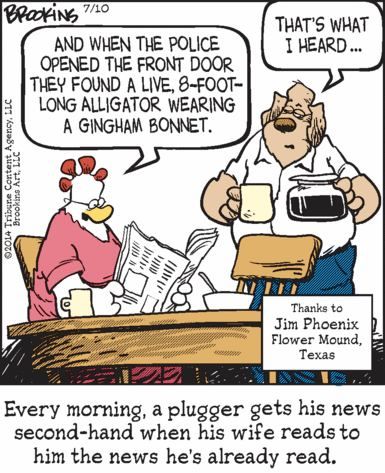 Sure, most people tune into Pluggers for the lower-middle class exurban cultural resentment, but I think they’re going to like the new creative direction, where it’s just streams of absurdist nonsense, just fine!