One of the many questions I have about the post-animapocalypse world of Slylock Fox involves biodiversity: have the newly sapient animals remained restricted to their original ranges, or, like the early members of genus Homo, are they using their smarts to conquer new environments? Today we learn that Australia, at least, is still largely the domain of its unique native fauna, who have in their brief period of ascendency already established an iron-clad hierarchy: the marsupials wear fancy clothes and sell expensive baubles to each other, while the monotremes live on the margins of society and are forced to steal to survive. Unfortunately, the marsupials aren’t equipped to maintain the oppressive social structure they’ve created and have been forced to call in placental mammals from outside to help. If human history is any guide, this is a terrible, terrible mistake.

Haha, looks like we’ve reached the real talk phase of Gloria’s exit interview! Anyway, everybody in Judge Parker is doing no work and getting paid for it and now people are getting grumpy about it for some reason. 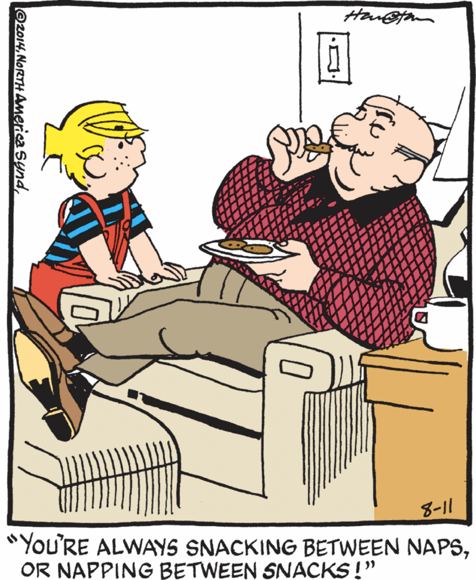 I think this is the most I’ve ever seen Mr. Wilson enjoying himself! He’s just going to town on some snacks and then he’s going to pass out on the couch covered in crumbs. Dennis is being a total scold about it, which I deem to be unusually unpleasantly menacing.