Hey all, remember when Crock creator Bill Rechin died in 2011, and then a year later his son Kevin, who had taken over the strip in accordance with the Legacy Comics Law, declared that working on his dad’s creation made him too sad and he declared that he’d be quitting and shutting the strip down? And there was a note in passing that King Features would make “classic” Crock strips available to “foreign” newspapers for three years, and yet Crock continued to appear in American newspapers, or at least on the King Features site? And the strips that appeared didn’t seem to be particularly “classic”, but looked pretty much exactly like the strips from the decade or so leading up to Rechin’s death? ANYWAY, if you’re like me, you were probably hoping to watch Crock fade away into semi-fond and very vague memories without ever having introduced a black character possibly named “Three” who cheerfully asks people if they “ever do the ‘hip-hop.'” Today’s strip reminds us all that hoping for things only leads to disappointment. 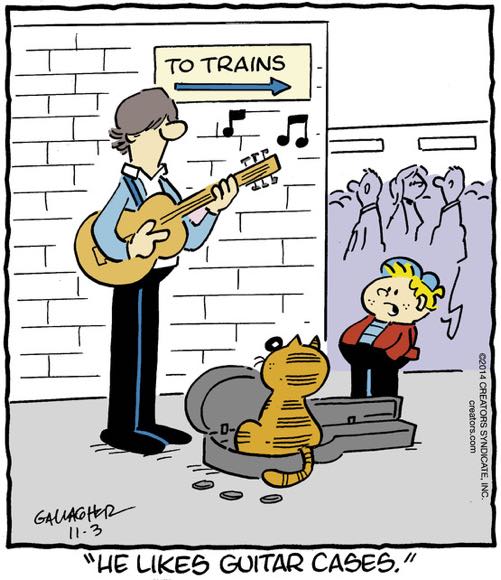 I guess as purveyors of cultural/musical stereotypes go, today’s Heathcliff is significantly less problematic than today’s Crock. “These rock and rollers today, they’re all tall skinny white fellas with that ‘mop-top’ haircut, right? Like those Beatles that the girls are all screaming at? Let’s have Heathcliff sit in one of their guitar cases while he begs for change on the subway, that’ll show them. Heh heh, Heathcliff, you truly are the comics pages’ bad boy.”

Fun fact: Martin did purchase a table! For his apartment. Which is where he and Margo quite obviously are now. Definitely not in a restaurant. Real easy to get a table in your dad’s apartment, Margo. Just saying.