Guys, the Mudlarks have won its first state championship in years, so I guess it’s OK if we let the strip revel in it for another week or so instead of moving along to basketball season or whatever’s next. We may not have actually gotten to see Gil and Kaz triumphantly driving their banged up late-’90s Nissans behind the Milford Fire Departments most expendable vehicles, but at least we’re being treated to a long, hard look at the incredibly phallic state championship trophy. Go ahead, nameless Milford students! Stroke the trophy’s golden shaft, from its bulbous football-head down to its helmet-balls! You know you want to!

(If you’d like to celebrate the Mudlark’s championship season in style, the cool kids at the This Week In Milford blog have a t-shirt you might be interested in!)

I think it’s a pretty safe bet that nobody involved in the current iteration of Barney Google and Snuffy Smith (or, for that matter, any of the previous iterations) actually lives in an isolated, impoverished hamlet in the Appalachians and/or Ozarks. So strips like today are interesting because I guess they’re supposed to represent what a flatlander would think a hillbilly’s idea of a flatlander would look like? Backpacks are the key, apparently. Anyway, these effete poverty tourists are looking pretty smug for people who are about to get murdered. 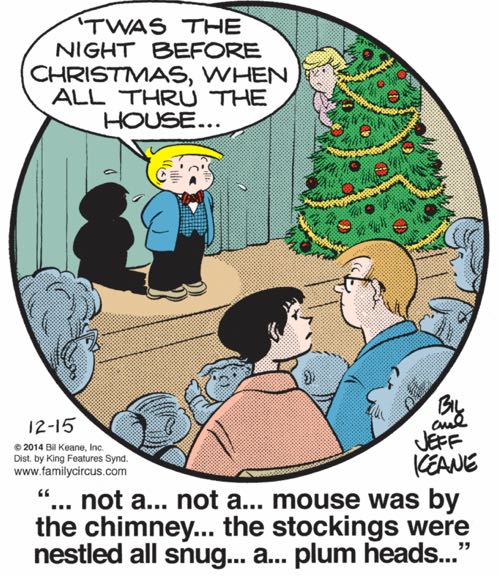 Oh, man, there are so many great things about this Family Circus. There’s Billy’s look of shame and fear as he realizes that his usual goof-off attitude towards life and school assignments has finally resulted in something unpleasant happening to him, and his teacher’s similarly stricken appearance as she realizes the magnitude of her mistake in giving her most sullen student stage time. Then there’s the way Big Daddy Keane stares blankly at his failing son, while his wife glares at him, thinking “I’m going to go ahead and blame you for this.” But the best, the absolute best, is little Jeffy pointing and grinning, as if to say “Look! I’m not the one fucking up, for once!”

Crankshaft isn’t what you’d call sentimental, but he knows one thing for sure: if you don’t lure a white-bearded drifter to your home with the promise of a hot meal and then force him to wear a dirty old Santa suit and stand on your lawn for the entire month of December, it’s not really Christmas.