There’s been a definite and sad decline in the number of Marty Moon plotlines in Gil Thorp lately, which is really too bad because he’s an amazing character who’s engaged in lots of fun hijinks over the years. Like the time he got grifted at golf by a Ben Franklin lookalike and ended up passing out drunk in his car, or when he had a public access TV show dedicated entirely to talking smack about Gil but then his bosses got tired of his routine and replaced him with a pair of dumb teens. He even once pretended to be a kid’s dad, in order to trick Social Services into believing that kid had a stable home life! But lately he’s been reduced to asking Gil occasional pointed questions and doing his play-by-play from a inside a wooden packing crate. So I’m excited about Gil warning his naive young player about Marty’s unscrupulous journalistic practices, because hopefully that means we’re going to be treated to some actual unscrupulous journalistic practices, or at least Gil rousting himself from his usual ennui to yell at Marty Moon for perceived transgressions.

Just based on this strip you might think this alligator attacking Bald Ponytail False Flag Ecoterrorist is some kind of coincidence, but in fact Mark spent most of last week carefully luring this villain to an “alligator mound,” which I guess is a mound that … alligators … live … in or near, or something, and as someone who gets most of his nature info from Mark Trail, I’m going to go ahead and believe this is a Real Thing. Anyhoo, I’m a little disappointed that our baddie has turned into a stiff, expressionless Ken doll at the moment the beautiful and violent alligator lunges at him, but I am quite charmed by the evocative final panel, as his useless pistol falls to the earth while he’s presumably being devoured off-panel.

There was a point, early in this blog, where I used to do some jokes about how Margo loves cocaine. It never really became that much of a running bit, but, just for the record, she still really loves cocaine. 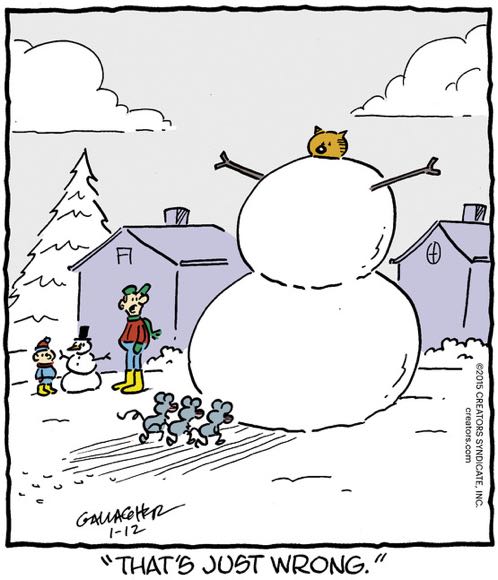 If being rolled up into a giant Wicker Man-style effigy made out of snow and worshipped like a god by mice is wrong, then Heathcliff doesn’t want to be right.