Welp, looks like next year’s Worthy Awards will be a mere formality, as today’s final panel, in which a wild-eyed Amy waves her fist in the air to indicate just how jazzed she is to be marrying a rich dude who will allow her to quit her job, will clearly sweep every category. (I certainly hope she’s also making barking noises like the “dog pound” from the Arsenio Hall Show.) Hanna is happy too, because Dave’s riches have bought Amy access to both time to personally care for her child and hired help to care for her child when she wants to use her time for something else! No more babysitting for Hanna! Also, Dave can buy Gordon all the screens he wants so he never has to look any of his family members in the eye ever again!

I really thought that this storyline had another twist in store, but it’s Thursday and Hanna’s self-satisfied thought balloon has me thinking that this is the plot-wrapping-up week, and we’re going to end with both Amy and Hanna having solved their problems by finding and marrying the right dudes. My only regret is that the whole thing didn’t end in a Shakespeare-comedy style double wedding at City Hall, with Gordon playing the “holy fool” character (a modern version who just stares vacantly at a Gameboy the entire time). 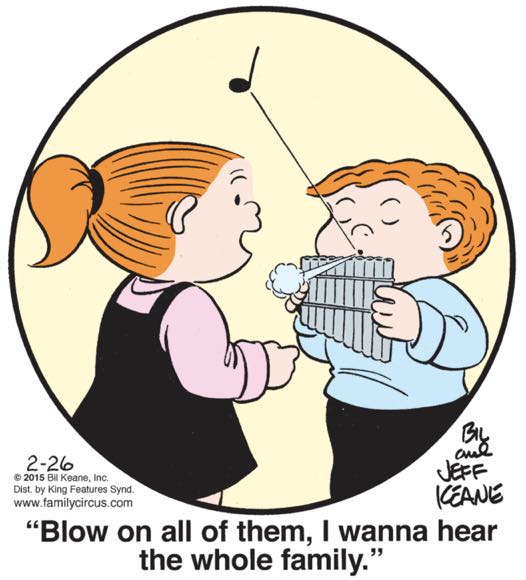 Dolly looks at a set of rigid metal pipes of varying sizes bound together forever and only capable of producing noise in response to the breath of some vastly larger being and sees a “family,” which tells us a disturbing amount about her own take on her home life.