Hahaha, thank you, Spider-Man, thank you for wrapping up this storyline in the most pointlessly absurd way possible. There’s nothing about this that I don’t adore. I love that the potential dramatic purpose of Mysterio’s double-masking is undercut by the strip revealing the truth after only one panel, and I sincerely hope the reasons behind it are never discussed or even mentioned. I love the fact that the “Dash” Dashell mask is presumably fixed in that glum expression. I love that he’s got glasses perched on top of the mask, and that those glasses apparently have transition lenses. I love the weird grimace Beck is making as the mask comes off, which is actually the sort of face you’d make if you were wearing a fishbowl full of water over a latex mask. I love the fact that all this time we’ve been set up to think that Rory McCormick, the douchey special effects guy, is Mysterio, but it turns out to be some other dude we’ve never even heard of before this point. The only way I could possibly be happier would be if Spidey pulled off the Quentin Beck mask only to discover McCormick’s face underneath.

Basketball manager/secret coaching prodigy Bobby Howley was gently admonished by Gil at the beginning of this storyline for acting more like a coach than a manager, and since then Gil and Coach Kaz and Coach Mrs. Coach Thorp have appeared not at all, while Bobby has dished out basketball and/or pharmaceutical advice to boys and girls alike. Today, however, we see the limits of his keen mind: while he may see the basketball court as an easily solved equation, clearly that triangular shape of a piece of pizza has got him in over his head. “Well, I can easily fit this end of this slice into my mouth, so I can just keep chewing my way all the way to the crust in one go … WAIT NO TOO WIDE ABORT ABORT ABORT”

June is having a hard time figuring out how not to pay attention to Sarah, and Rex is happy to help! “You’ve been busy, but I haven’t, but I still have no idea what she’s doing! Say, don’t we have somewhere to be? Somewhere that doesn’t involve Sarah at all?” 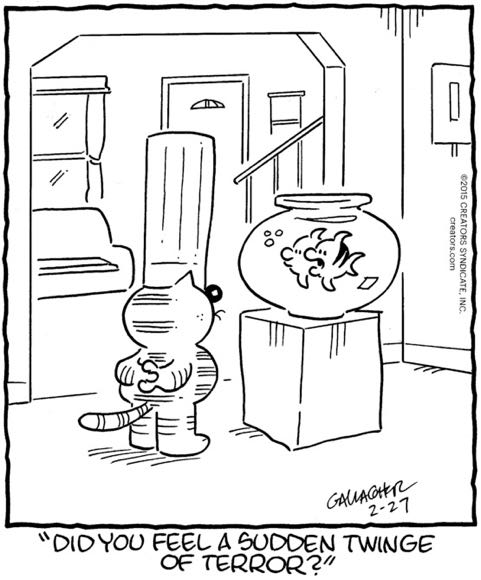 It’s funny because the fish feels a twinge of terror because Heathcliff is openly declaring his intention to kill and eat him.