Is this … is this the ending? The ending of this storyline? A mother and daughter shake hands while sitting amongst the boxes, having both found men to solve all their problems? A daughter makes vague promises to “help move,” probably involving browbeating the landscapers from her husband’s vast estate, and a mother makes vague promises to “help with the wedding,” which certainly doesn’t mean financial help and probably refers to picking out flowers or bridesmaids dresses or something? Also, the mother is going blind? Let’s not forget that the mother is going blind and that the flowers and bridesmaids dresses will be even more hideous than usual. Little Gordon sits on the floor, entirely lost in his electronic world. This is the delightfully transactional ending this story deserves. 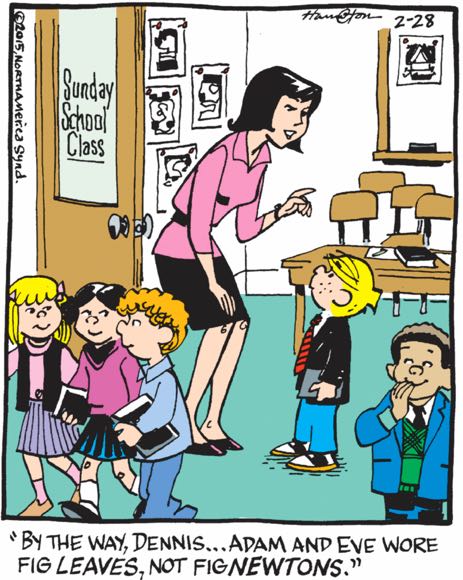 Hmm, Dennis’s teacher takes him aside after class, as if to gently correct him privately, but makes sure to do it while the other children are still in earshot, so that they can snicker at his ignorance! I’d say the menace has become the menaced, except that Dennis managed to get a Sunday School lesson to linger on nudity and shame, so maybe he’s playing a much deeper game here.

Ha ha, it’s funny because nobody likes Sarge, and it’s breaking his heart!