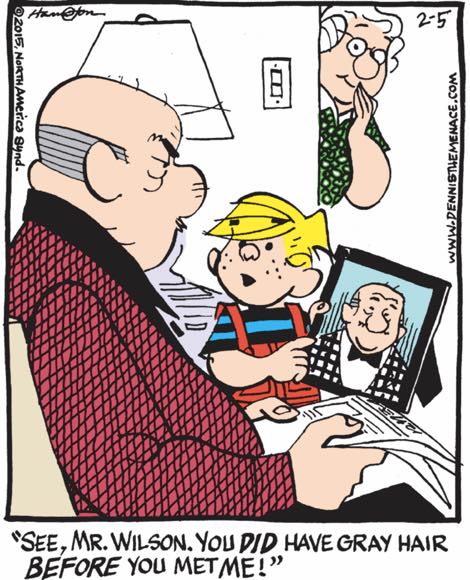 Characters in long-running comic strips exist in comic-book time, a fact that I’ve had fun with as recently as yesterday, so I certainly can’t fault the actual comics artists for playing around with it. I particularly enjoy the panels here that do purport to show earth-shaking changes — look, Blondie’s employed! Dagwood used to ride the bus, like a poor person! The Facebook logo in the first panel is rendered so lovingly that I suspect this is some of kind of cross-platform promotional deal going on.

At first I assumed that Dennis the Menace was playing the same sort of game here — look, Mr. Wilson is old in that picture, becuase he’s always been old! — but the line about “before you met me” really thew me. Dennis is young, guys. Like, he’s supposed to be seven, maybe eight, tops? Mr. Wilson is an old enough old man that he’d have been an old man seven years ago. Seven years is not very long. Dennis is younger than this blog. I’m old. I’m Mr. Wilson. Oh god, I’m so very, very old

Man, look how sad Mitchum and Justin look! They really weren’t prepared for the emotional journey they’re on right now. You know what they say: never go into business with anyone if you’d be real broken up when you eventually have to murder each other.