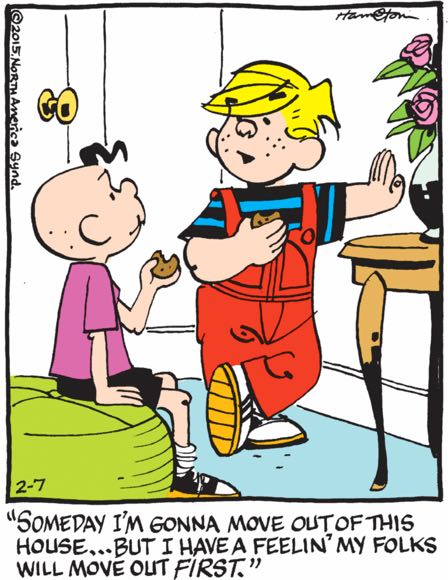 It’s true: one day Dennis is going to come home from school and find that his parents have gotten tired of his antics and moved out, taking only enough clothes to fill a suitcase and leaving no forwarding address. He’ll have to move out eventually too, of course, either when the food runs out or the bank forecloses, whichever comes first.

Spider-Man might not put that much effort into fighting crime, but if there’s one thing he always brings his A game to, it’s moronic banter. I sincerely wish this first panel could exist in animated GIF form, so that I could watch Spidey stumble around, arms flailing, for the entire time it takes him to spell out “M-I-S-T-E-R-I-O,” then mug awkwardly as he waits for the approbation for his dumb bit of wordplay that never comes.

Say, have you been wondering what’s been happening in Rex Morgan, M.D.? What’s been happening in Rex Morgan, M.D., has been that Rex thought he might have a little while, just a little god-damned while, where he’d get to sit quietly and do a little painting and not have to talk to anybody. But turns out he doesn’t. Turns out he never does. Fine, June, get the resumes. No, I don’t care, just get them.