I prefer to think that this episode takes place in the Slylock Fox world in which sapient animals have risen up and taken over — maybe several generations later, when the few remaining human holdouts, the Slick Smitties and Count Weirdlies, have finally gone extinct. With no humans left and none even in living memory, it’s no surprise our talking mountain goat can’t answer any questions about the vast vaguely simian face carved into the side of this cliff. George Washington’s shocked, staring expression is particularly poignant here, as he contemplates his state as a baffling final reminder of a vanished race. 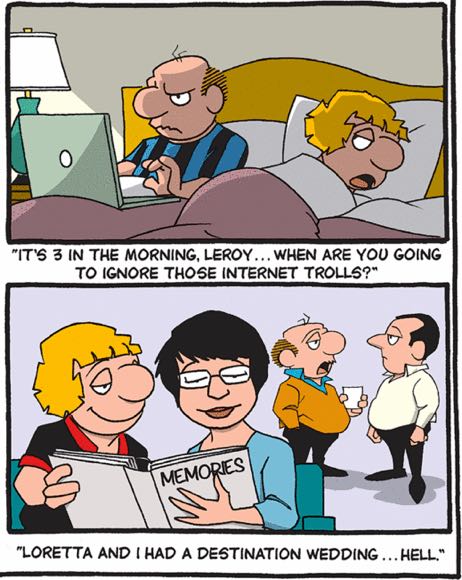 I got not one but two genuine laughs out of today’s multipanel Sunday Lockhorns. I’m definitely curious about the backstory to Leroy’s grim online mission in the top panel — does he have his own blog, or popular Twitter feed, which attracts Internet haters? Or does he feel compelled to wade into the comment sections of local newspaper articles or, God forbid, Wikipedia talk pages and correct people who are being wrong on the Internet? The second panel is more self-explanatory: Like Dante, Leroy and Loretta journeyed into the bowels of Hell, where God punishes in eternal agony the souls of the wicked, and got married, in a ceremony presumably conducted by actual, literal demons. 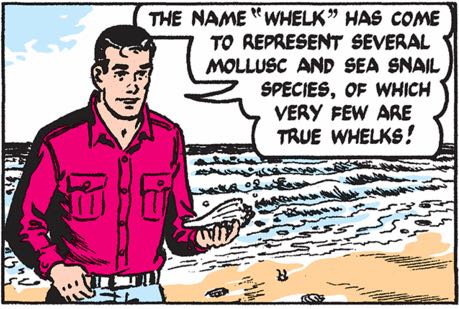 Wow, Mark really cares about whelk purity. “Hey Mark, look what I found on the beach!” “That’s not a true whelk, Rusty!” [slaps it out of his hand and into the sea]