I guess I’ve sort of resigned myself to the notion that Apartment 3-G is now a perpetually vague dreamscape where odd things blandly happen for no particular reason and subject to no human logic. Anyway, is Margo’s ex-boyfriend Greg still James Bond? Is Eon Productions starting production of the next Bond film without announcing the lead actor, even to his co-stars? Will Bond just be inserted into the movie in post-production, via the same advanced green-screen technology that allowed the Owen Wilson-voiced Marmaduke to hit William H. Macy in the nuts, twice? Has Skyler just answered a Craigslist ad for a “Bond movie” that will turn out to be a porn shoot? Stay tuned! 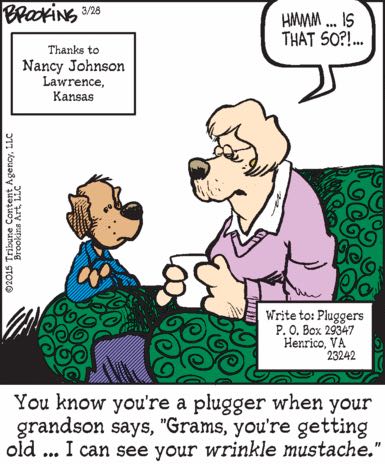 Wait, is a wrinkle mustache just when your upper lip gets so wrinkly it looks mustache-y? Does this only happen to pluggers? Or do only plugger grandchildren dare to be so rude to their elders?

Oh wow so you think big government is going to take care of our beetle problem, huh? NO THANKS LIB!!!!!!!!