The Hanna-Sean-Amy-Gordon storyline (haha, just kidding, Gordon was not actually involved in any meaningful way) is finally over, though we can’t say for sure until someone digs it up and puts a stake through its sinister heart. But until then, let’s enjoy the tale of the first time Mary and Jeff met! This might be an enjoyable story to see in flashback, so naturally we’re watching the two of them exposition it to each other over fish- and vegetable-disks at the Bum Boat. I’m a big fan of Mary’s use of the phrase “former bigwig” here. “Obviously I could tell you were a nobody, Jeff, but how was I supposed to know that you used to be somebody? I didn’t see a tag, and you weren’t dressed the part, and you certainly don’t exude confidence or competence of any sort!” 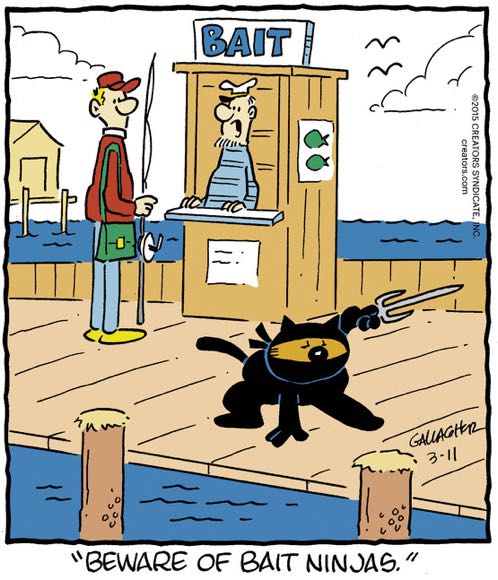 The less said about this cartoon, which seems like one of the saddest attempts at combining the syndicated comics character Heathcliff with vaguely whimsical pop-cultural tropes to date, the better, but it does lead me to one of my current favorite obsessions, namely looking up dumb URLs to see if they’re available to purchase. Up until fairly recently, URLs either ended with a two-letter country code, like .ca or .uk, or a fairly limited set of generic codes, like .com, .org, or .gov. Then a few years back some new, much dumber top-level endings were introduced, like .biz and .info, and lately there’s just been a flood of truly moronic ones, one of which is .ninja. This is meant to appeal to serious scholars of the semi-legendary shinobi of Japan’s turbulent Sengoku period the sort of dips who think changing their job title from “web marketing assistant” to “social media ninja” makes them sound cool, but it’s worth noting that the domain name bait.ninja is available for only $14.99 a year, and while I’m not going to buy it, if somebody else wanted to and have it just redirect to this post, I certainly wouldn’t object. Also, and I’m just putting this out there, when you look to see if a domain name is available you get auto-generated suggestions of similar domains you might be interested in, and this is what I got when I checked on bait.ninja:

Apparently most of the incidents in this plot had been set up by Peter and Mary Jane to trick Mysterio? Who they didn’t even really know was involved for a lot of it, I don’t think? Nice try at tricking us into thinking these people are smart or capable of forethought, Newspaper Spider-Man.