If you’re like, me you saw the Perfesser’s statement that he attended a “1950s sock hop” and immediately thought, “Have the bird-men of Shoe invented time travel, and do they use it to travel back to enjoy the innocent entertainments of simpler eras?” But the answer is clearly no, as obviously the Perfesser wouldn’t have phone service in the days before the deployment of modern wireless networks. So instead, we’ll have to console ourselves with the deliciously depressing story of the evening that we can derive from this strip: the Perfesser, having finally worked up the energy to leave behind another grim night at home, went out for a social event with fellow bird-nostalgists, only to be overcome with social anxiety at the thought of actually interacting with others; he thus spent the whole evening staring at his phone screen, with eventually disastrous results. 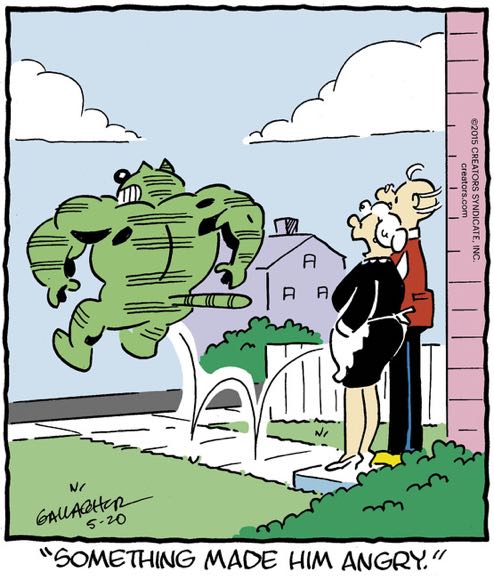 Hmm, how many SynergyPoints™ should we award today’s Avengers-themed Heathcliff? Well, we should deduct some for the fact that it was published nearly three weeks after the movie debuted, but perhaps add some back because the colorists correctly did up Heathcliff in Hulk green despite the absence of explicit color or even name cues in the caption text.

OK, Newspaper Archie, we know you’re just slumming it here on the comics pages and most of your money comes from those Double Digests on sale at supermarket checkout aisles around the country, but that doesn’t mean you have to be rude about the genre.