As entertainment becomes more and more dominated by reboots and sequels of well-known franchises, moviemakers are encountering a real dilemma: is it worthwhile to spend significant portions of the first movie of a rebooted continuity covering the protagonist’s origin story? Can we assume that pretty much everyone already knows about the radioactive spider, great power great responsibility, Bonesaw is ready, etc., and just skip to the superheroics? Or are there still newbies out there who would end up baffled and alienated by this approach? Today’s Newspaper Spider-Man proposes a radical solution to this problem: simply start each new series with the main character explaining his background story to a Freudian analyst. Problem solved! Storytelling problem solved, I should say; Spider-Man’s deep and crippling emotional problems certainly aren’t going to be resolved in just one session.

When this puzzle appeared in a Sunday strip in 2009, I mostly saw it is a convoluted trick by Grandpa to make his grandkids feel like jerks for not remembering his birthday. But now that we get a closer look at him — his stubble, his wild eyes — I’m getting a different vibe. A crazier vibe. A “last year was 72 and this year is 74 and you add the digits and you get 20 which is what the Illuminati invoke as a ‘triangular’ number” vibe. 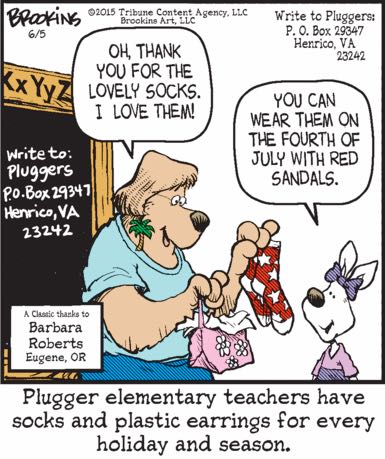 Nice job, colorists: textual clues clearly indicate that those are supposed to be white stars on a blue background, the better to make American flag footwear for the Fourth, but by making them red you’ve turned our plugger child into a promoter of Godless Communism.

I know there are only two kinds of background in Apartment 3-G anymore — “dowdy mid-century apartment interior” and “mid-century New York City streetscape” — but a narration box in Wednesday’s strip said that Lu Ann and Mike’s gross flirting was happening “at the hotel.” But now suddenly there’s a knock on … some door? And Tommie’s arrived? And she’s keeping busy? And the background is different? WHERE IS EVERYONE WHAT’S GOING ON WHAT IS HAPPENING HELLLPPPP