Rusty isn’t just a hideous boy-thing that the Trails took in because nobody else would let him live inside; he’s also a constant danger magnet who needs to be rescued on the regular! You’ll remember, of course, the time he got stuck under a car, which led to Mark sacrificing his moral code and punching a cop in the face. Today’s drama plays out much more quickly: not only is Rusty endangered not by some human-made machine but by Mark’s beloved nature, but it’s Mark who ends up unconscious and concussed at the end of it. Will Rusty have to find hitherto unseen reserves of strength and drag Mark to safety? Will he allow Mark to die and just forlornly stare at Mark’s corpse until he gets hungry, and then start eating it? Either way, I think the real lesson here is that this lake is surrounded by rotting trees that just fall over when you barely look at them, so maybe there needs to be a local beaver population to clear out the literal dead wood.

“I mean, my daughter is an actual apprentice art forger for the mob, so what’s a little light counterfeiting between friends? Anyway, take care of it, but don’t feel a need to let me in on the details. Remember, I can’t testify about anything I don’t know about!” 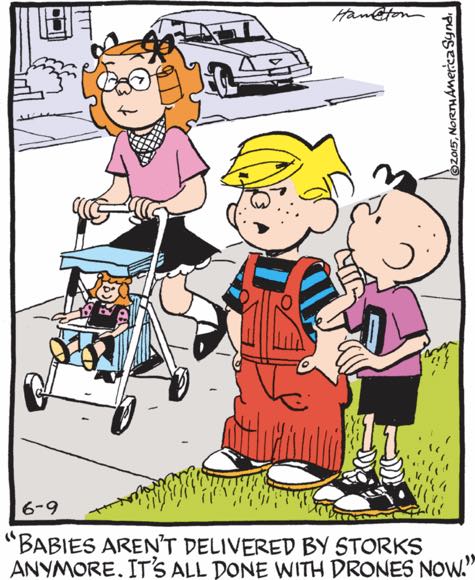 Dennis embraces the dystopian future where human offspring are grown in vats and, once weaned from their wire mothers, delivered by flying robots to their assigned workstations, A+ menacing.