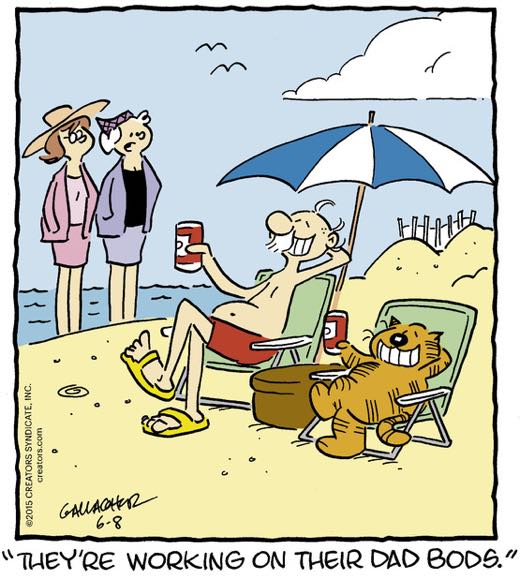 The newspaper comics as a rule are neither created by nor designed to cater to young people, or people particularly up on pop culture ephemera. This is a medium that still thinks that an iPod is a cutting-edge piece of technology, and that jokes about black people hiding things in their afros is funny. Thus I’m pretty impressed by today’s “dad bod” reference in Heathcliff. This is a concept that I’m mostly aware of as a running joke on Twitter; the phrase appears to originate from a blog post by a Clemson college student from March 30, which went viral when linked to and gif-listicle-fied by Buzzfeed on April 30. Thus the idea has been in the public consciousness for barely a month, and when you factor in the lead time newspapers require, you realize that in comics time this joke was adapted into Heathcliff form in the equivalent of those incredibly tiny fractions of a second that can only be detected by incredibly precise atomic clocks. I was so taken aback by this cutting-edge joke, in fact, that I almost didn’t notice that … Heathcliff is drinking beer in this panel? Can cartoon cats do that? Drink beer? On the funny pages?

On a normal day in the comics, when a guy in a hardhat superciliously challenges a Spencer-Driver with a “unless, of course, you too have a master’s in structural engineering,” that would be the best thing that happened in Judge Parker that day. But not today. Not today, when the first-panel narration box dares to follow up the sentence “Rocky consents to investigating the viability of using cargo containers for interior offices” with an exclamation point. I like to imagine that there’s a real voiceover actor reading this, and they made him record this line again and again. “More emotion,” bellows the director, “more dynamism. Rocky’s investigating viability, for God’s sake.”

Hey so remember when Lu Ann was “at the hotel” then there was “suddenly a knock” and then Tommie appeared? Well, it seems … pretty clear that they’re back at the apartment today? And also Tommie has a different haircut. I’m real worried about Apartment 3-G, guys.

NO RUSTY DON’T TELL CHERRY WHERE BABIES COME FROM

she’s gonna have some questions for mark

questions he does not want to answer