OK, so, that shark that Ken was all excited to catch? Well, he wasn’t going to kill it, he’s not a monster, he loves animals just like his beloved squirrel-feeding Kelly does. Ken just wanted to best the shark in combat so he’d feel like a big man, but then he was going to throw it back. That’s why it’s super disappointing that this shark he caught is already dead! This dead shark has Mark Trail written all over it, which I assume means that Ken’s going to call in Mark to solve the Mystery of the Dead Shark, which is probably going to boil down to “Hey, uh, Ken, sometimes sharks die, you know?”

“How can something that seems good to me not always be good in all cases?” Trixie will be stuck in the body of a baby, which makes her halting moves towards an adult understanding of the world all the more heart-rending. 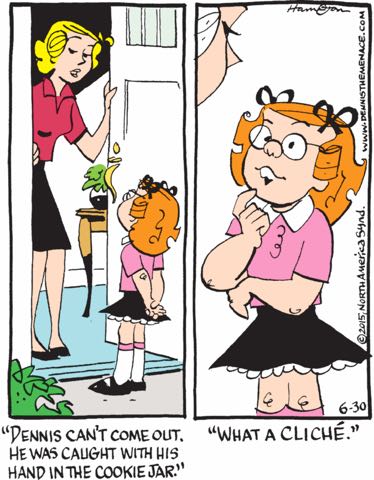 Always the smart one, Margaret recognizes that her entire universe is built out of worn-out tropes and borrowed memes. The true menace is the crushing banality of it all.