Uh oh, looks like Ian’s plan to have Toby cook his boss dinner has hit its first snag: Toby has no desire to cook Ian’s boss dinner! That’s because Toby is not some young trophy wife who lounges around the condo pool gossipping with Mary all day while living off her husband’s posh academic salary; she’s an artist who Ian snatched away from the Greenwich Village scene to sterile southern California exurbia, and her creative urges still need an outlet. It appears that she’s moved away from the tiny paintings of her New York days to a new medium: tiny sculptures lovingly crafted then put on a shelf in her studio to be admired by nobody. Actually, that white lab coat makes her look more like a scientist, and she appears to be sculpting a tiny replica of Blucifer, the giant horse statue with glowing red eyes outside Denver Airport that literally killed its creator, so maybe she’s doing research on how to harness its evil powers. Better take Hilton out to dinner Ian! Better take him out to dinner … forever. 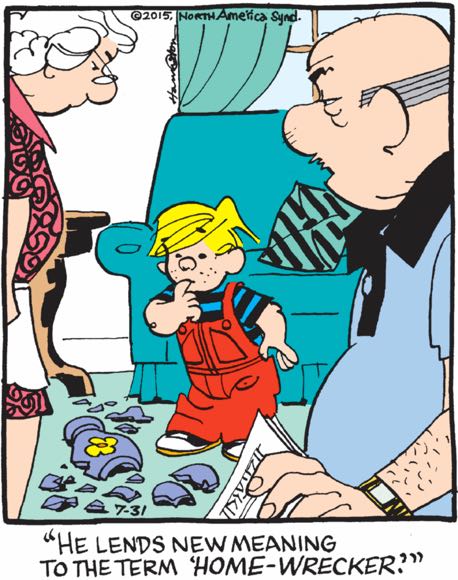 “The meaning here is that he’s literally wrecking our home, to be specific. He’s not breaking up a marriage by seducing anyone’s spouse, which is the usual meaning of the phrase. Just wanted to be really clear on that. Why would I even bring that up? He’s a child! I, uh, I really should walk this back, shouldn’t I.” 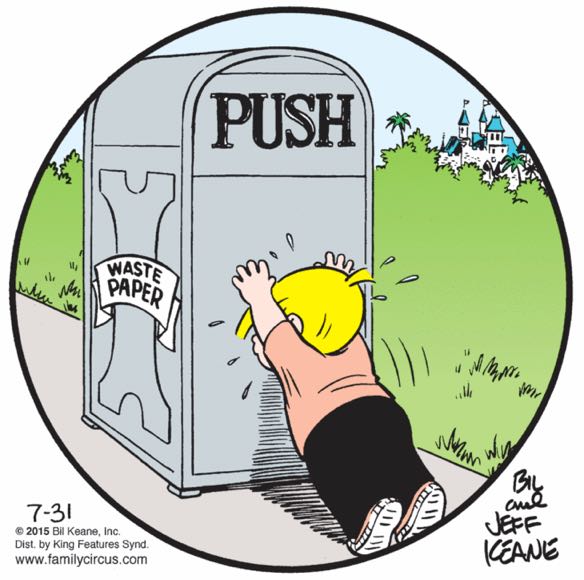 The best part of this installment in the current “Keanes go to Disney World” sequence isn’t that Billy is being a moron; it’s that he seems to be all by himself, far from the hubbub of the main areas of the park. It’s as if his parents lured him to this out-of-the-way section, said, “Look, Billy, it says ‘PUSH’ in big letters! It’s very important that someone push it!”, and then ran away as soon as he was distracted.