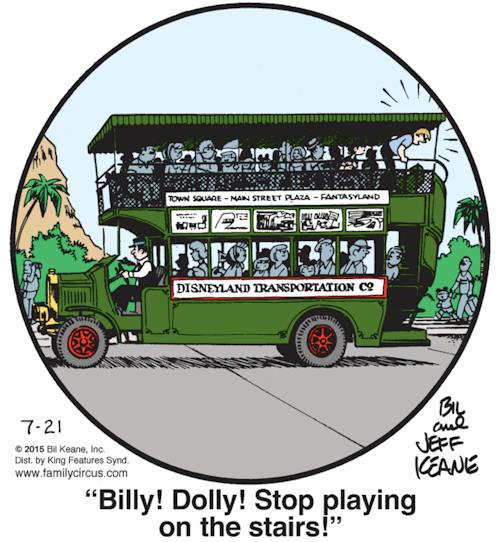 Fifty weeks out of the year, the fine folks at Team Family Circus bring you wholesome jokes beneath drawings of children. This is them telling us they’re on vacation, dammit.

I’ve always suspected that for Sarge, beating down Beetle was an end in itself rather than an attempt at discipline, and here he flat-out admits it. But it’s sad how bored and disengaged he looks in the second panel there. “No, I don’t care about the nap.” you can hear him say, “Beatings — of the prescribed duration and intensity — are what I do. They have become who I am. But lately I don’t even care about the beatings. As soon as I’m done here, I’ll go weep into my food.”

OK, so Kipawa here has challenged Guran for chief of the Bandar, which really irritates Guran trufans Kit Jr. and Heloise. Now we all know Guran is going to pull some mysterious win-by-losing BS out from under that manskirt of his so don’t worry. But what’s with the dress code for these Bandar events? We usually see the kids in loose-fitting Bandar-style thong ‘n’ sarong outfits, but they put on Gap to visit the tribe? I mean, Dad hasn’t even changed from his work outfit (never changes it so ripe ugh poor Diana).