The “Stonewall” Margo is talking about here is not the legendary Greenwich Village bar where the modern gay rights movement began, but rather some sort of English country house that fake psychic Diane was pushing as a setting for Margo’s parents’ wedding in a plot point from five months ago that you probably already forgot. Like everything else that’s happening in the current “baffling dreamscape” iteration of Apartment 3-G, this plot twist makes sense so long as you don’t think about any of the details in any way. Like, the UK isn’t exactly one of the cheaper real estate markets in the world, so I’m pretty sure a manor fancy enough to be on “that British show about some Abbey” would go for a lot more for $50,000, or even £50,000. Also, would just the prospect of Martin and Gabriella renting this place for their wedding suddenly cause it to quintuple in value? I mean, I know Martin is supposed to be super-rich, but, uhhhhhh.

Sure, Crankshaft’s whole thing is that he’s a loathsome asshole and that’s why this strip is unbearable, but I admit I kind of like it when he’s a loathsome asshole during his son-in-law’s attempts to bond with him. “That’s for the theater. Jesus Christ, I can’t believe I let my daughter marry a guy who makes theater comments at sporting events. You’re repugnant and you sicken me.” 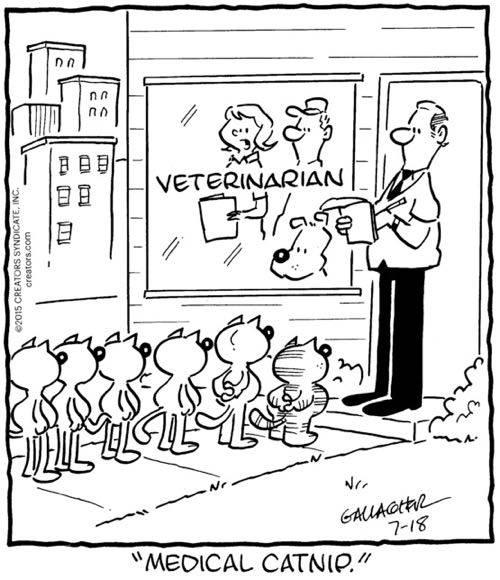 Ha ha, Heathcliff made an extremely transparent medical marijuana joke! You know, this could explain a lot about this comic’s specific brand of low-grade, vaguely surreal whimsy.

Hey y’all, I’m off on an east coast trip to see friends and family! Your Uncle Lumpy will be here for some non-fundraising fill-in action for a week and change. See you on Wednesday the 29th!