I like to think I’m a fairly modest person, but I will say this: because I’m both a tech writer and a comics blogger, nobody in the world is better equipped than I am to meticulously document when legacy syndicated newspaper comic strips make jokes about bitcoin. So here’s the Family Circus’s offering, coming in the wake of Six Chix and Barney Google and Snuffy Smith. I think it’s pretty clear, based on our put-upon ice cream man’s outfit, that this is a reprinted comic from the ’70s or ’80s, which leaves the question open as to what sketchy financial instrument was originally used in that word bubble. Junk bonds? Pet rocks? 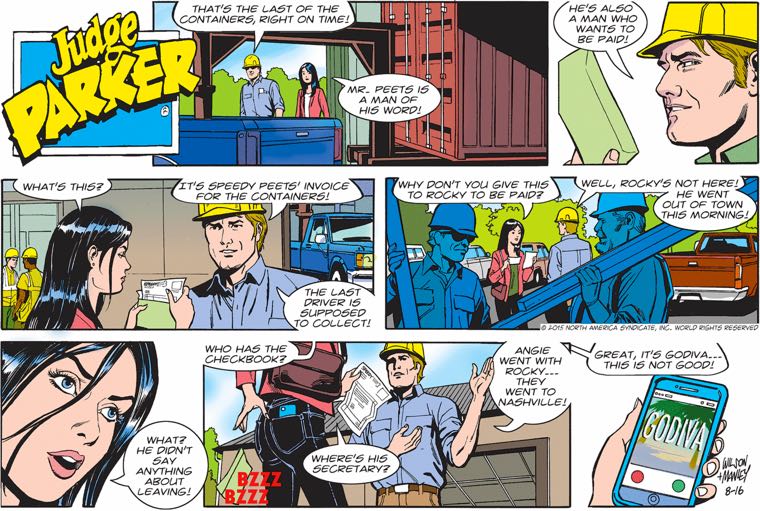 I freely admit to not understanding at all the financial details of the whatever business partnership Neddy has established with Rocky and Godiva, and one of the points I understand the very least is why all of the sudden Rocky started agreeing to pay for everything a while back. Something about that being the price for letting him publish his tell-all book about being married to Godiva? Anyway, I’d like to think that he and his checkbook’s abrupt departure corresponded exactly to the moment when retail sales of said book began. Next week may depict the most shocking event in the history of Judge Parker: a Spencer-Driver paying for something with her own money.

I am not comfortable with that knowing, self-satisfied look MaryLou is giving us here. “What Momma doesn’t know is that I’m living with a man! Did you guess? A man? A man who wears a baseball hat and a tie, and leaves his sporting equipment scattered around the house? Get it? And we’re fucking? A man?”