Wow, after weeks and weeks of virtually no forward movement or anything of interest in Apartment 3-G, we have something that … might be interesting? Lately, Margo’s taken to wandering around Manhattan in a fog of confusion, occasionally hassled by people on the street who claim to know her but whom she keeps pushing away. But now we learn that her mysterious stalkers are named … Tim and Eric? If these names ring a bell, it’s because Eric Mills was Margo’s grill-loving almost-fiance who died in an avalanche (supposedly) smuggling his brother Tim and the Pachen Lama out of Tibet. But maybe Eric survived, or, weirder, maybe he died but has been reincarnated/called forth out of the spirit world by powerful Himalayan magic, to join forces with his brother to … irritate Margo, for some reason? The other possibility is that this whole thing is some sort of prank perpetrated by discomfort-causing alt comedians Tim and Eric, which honestly seems equally likely.

Whoa there, Shoe: priests don’t turn water into wine or vice versa. A priest could help facilitate a little transubstantiation, but unfortunately the accidents of the wine are not transformed in that process, and thus it will still taste terrible. 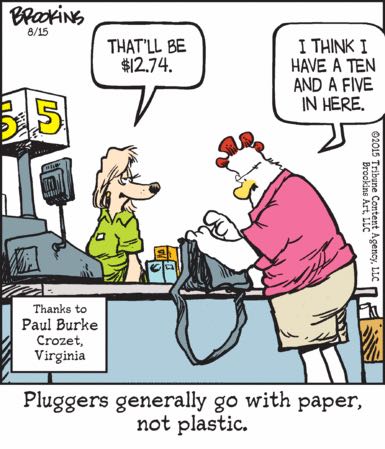 Pluggers don’t use CREDIT CARDS issued by BANKS controlled by the ILLUMINATI CABAL who want to DESTROY AMERICA and establish a NEW WORLD ORDER so YES they WILL be paying with LIBERTY SCRIP backed by the INTRINSIC VALUE OF THE MINERAL RIGHTS INHERENT TO THEIR ALLODIAL PROPERTY on which they DON’T PAY TAXES because they’re SOVEREIGN CITIZENS and if you won’t take that but you will take BIG GOVERNMENT’S FIAT MONEY then you my friend are very much PART OF THE PROBLEM and I’ll be posting about this on FACEBOOK, believe you me