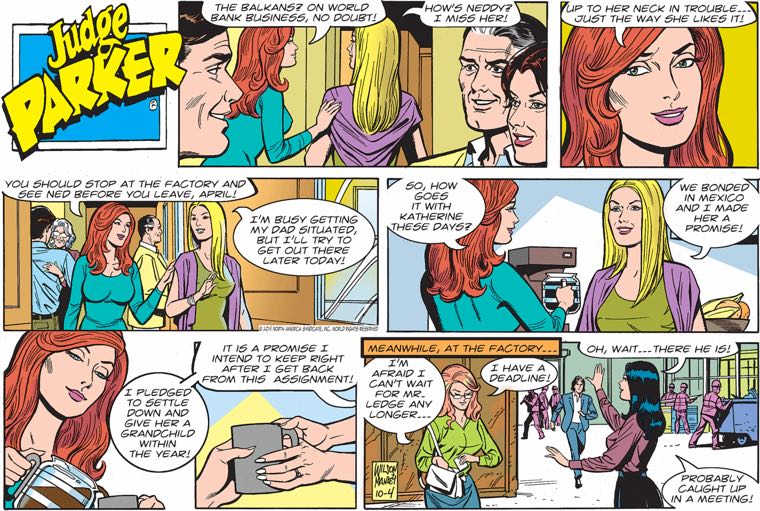 Oh, hey, I guess we’re turning back to some actual Parker family dynamics in the strip ostensibly named for them! April has just fallen seventeen notches in my esteem for using the perfectly gross phrase “give her a grandchild,” though I’m sort of impressed at how sure she is that she’ll be able to overcome the uncertainties of the human reproductive process within a set timeframe by sheer force of steely will. Of course, we should note the way April artfully deflects Abbey’s assumption that she was going to the Balkans on World Bank business. April is of course a CIA operative and knife-weilding killer, so presumably in a few weeks reports will emerge from Montenegro of an isolated mountain village, the entire population of which was found murdered in their sleep, with the only inhabitant missing being a single newborn baby. Katherine will have her grandchild within the year, all right. Katherine will have it in record time.

This poor woman is addicted to tops! She must fight this addiction by purging all tops from her life. There will be no tops, only bottoms. Every object will have a lower half but no upper half, an undersurface but no covering. How is this possible? What nightmare of madness-inducing, unnatural geometry is she unleashing on the universe? We will all be collateral damage in her terrible battle against her addiction.