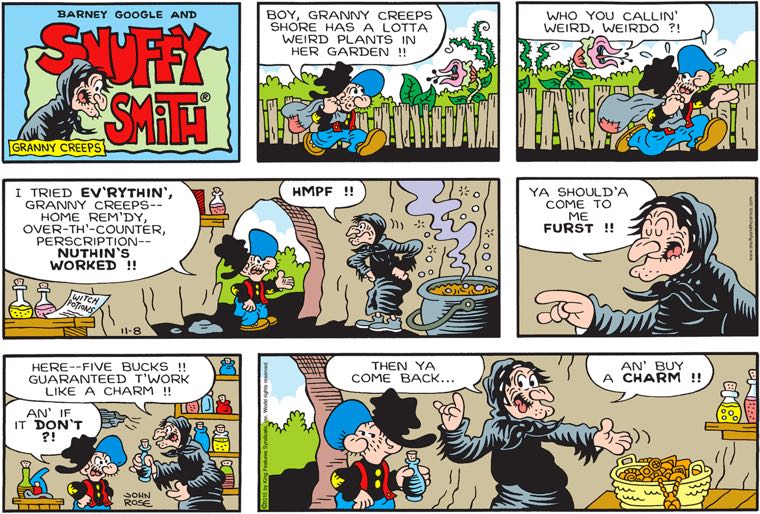 Fun news! The current creative team behind Barney Google and Snuffy Smith has decided to dip into the strip’s long history and bring us a long-forgotten character: Granny Creeps, a black-clad crone who lives in a cave and performs mountain folk magic for community residents. This might give rise to intriguing plotlines about the very deep persistence of pre-Christian belief systems in rural, isolated communities, but as the punchline of today’s strip makes clear, Granny Creeps is as much a grifter and fraud as Hootin’ Holler’s supposed champion of monotheism. 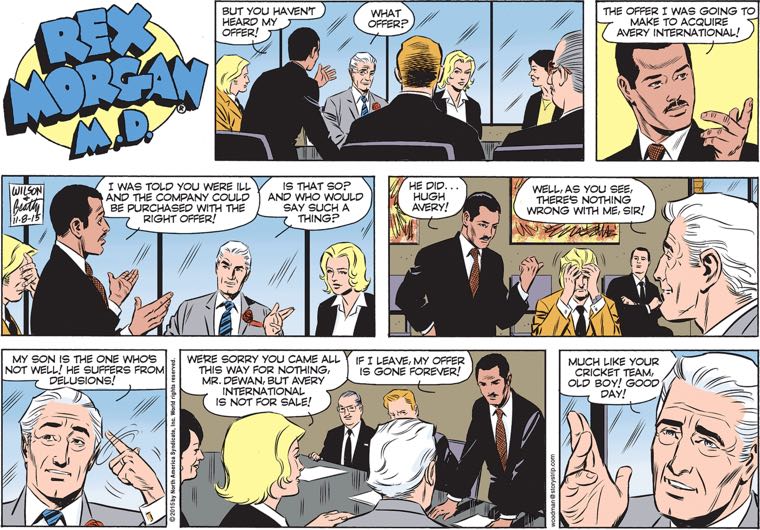 Hooray! Milton Avery, who is in fact ill, with debilitating dementia, of the sort that would prevent him from running a company, has managed to hold it together for the length of a board meeting, so he and his wife, who has no professional background in aerospace or spy satellites or lenses or whatever it is this company does, will continue to run it, rather than this nice Indian man who probably has some interesting ideas about new directions for the company and would at least carry on the tradition of cricket fandom in the corporate boardroom. Along the way, Milton has publicly humiliated his son, who has done nothing throughout this process but tell the truth about his father’s increasing incapacity and look out for the best interest of the company’s shareholders. Haha, remember Hugh’s last storyline, when everyone tried to gaslight him when he realized they were, in actuality, conspiring against him? Remember how his dad has been a monster to him for his entire life? Remember how he’s the bad guy in this storyline, for some reason?

you’re in a convertible

EVERYONE CAN SEE AND HEAR YOU, NOT JUST THE DRONE