Oh, dear, it looks like Mary Worth and Heloise, far from embarking on a grand adventure together, are just going to briefly chat in a cab and then go their separate ways. The Phantom strip can’t even bother to spend a whole strip on its own version of Mary and Heloise’s bland pleasantries, cutting away to two panels of the Ghost Who Walks’s elaborate and sadistic gamesmanship. Anyway, it’s good to know that the Phantom, who has a whole room full of priceless treasure and runs an actual diamond monopoly, encourages his daughter to benefit from the kindess of old ladies on fixed incomes.

Meanwhile, also in Manhattan, Spider-Man and Namor got into a fistfight and fell into the ocean, and MJ has decided that she’s going to save poor li’l Pharus? Somehow? Without his consent, or the consent of his guardians? I look forward to her bringing him to a doctor, who will say “Young woman, I’m not qualified to cure some kind of pointy-eared … fish … boy!” Or maybe he’ll just bust out the free samples of the new anti-pollution pills that the Pfizer rep brought over and the kid will be fine, and then Namor will feel sheepish and the conflict will be over.

You know who’s not going to be fine, though? The poor Atlantean who’s just had his life-preserving water-helmet shattered by White Lab Coat Lady over there! Sorry dude, I know you were just protecting this poor youth from the surface-monsters, but now you’re going to air-drown after being dispatched with a truly inscrutable witticism. 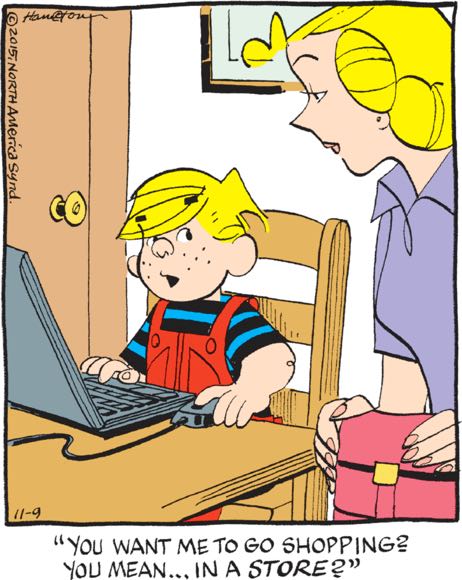 The year is 2047. Adult Dennis strips out of his Amazon-issued jumpsuit after completing his 19-hour shift in the vast Amazon Fulfillment Warehouse that occupies most of what was once known as “Ohio.” He nestles into his sleeping-shelf within the 100-square foot Dorm Pod that is his home; as he dims the lights, the last things he sees are the vast, mandatory portraits of Jeff Bezos that dominate each windowless wall. He thinks back to that day long ago, when he made that flippant remark to his mother about shopping — his mother had been reassigned to the Box Assembly Division somewhere in the Dakotas when he was a teenager, he hadn’t heard from her since. He began to think that maybe he had been the true menace, that day.

Yeah, sure, OK, Gil wears a Milford sweatshirt to work pretty much every day, and you might think they all look the same, but he can tell them apart, OK? Mostly by the stains.

[48 hours earlier, at the Morgans]

“Look, Rex, I’ve already signed mine. Will you just sign yours?”

“Ugh, will you stop talking if I do?”

“Fine. What is this about again?”

“Do you really care?”