OK, I admit it: I will genuinely enjoy it if Ralph’s near-impossible dream is derailed by Crankshaft’s incompetence. It would bring things to a level of sad-sackery reminiscent of Peanuts, and I genuinely mean that as a compliment. Perhaps Crankshaft will actually engage in some self-reflection and self-recrimination, which I can only endorse; plus, let’s face it, Ralph would in fact be a terrible mayor.

Welp, Holly has finally figured out what it’s gonna take to get Welcome Back, Carter ratings up to Survivor levels: some red-hot awkward English-teacher-making-a-failed-pass-at-football-coach action! I honestly can’t tell if she’s underestimating or overestimating the American viewing public here. 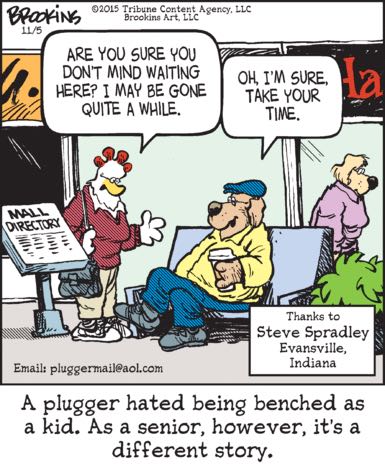 Pluggers remember when they were kids, when all they wanted to do was run and jump and play and move their bodies in all sorts of ways. Now, things are different. Now they’d rather move as little as possible, and even when they aren’t moving, they can’t quite seem to find a way to arrange their body so that some part of it doesn’t hurt. Sometimes pluggers think about how when they’re in the grave, they won’t have to move at all, and they won’t be able to feel anything. Pluggers have been thinking about that more and more lately.