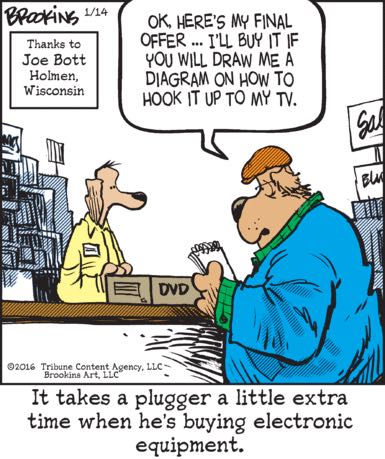 I’m not sure what the context would be for anyone, even this plugger, to buy a new DVD player in the year 2016 — maybe he finally put in a disc into the old one when there was already one in there one too many times — but I do like the way the letters seems wobbly in his word balloon, really conveying his sense of desperation. “Please, son, you gotta tell me how to hook this thing up. I got all these old westerns and All In The Family episodes, I already switched from VCR tapes to these discs, I’m not switching to iTunes or whatever they have now. I don’t even know what an iTunes looks like! That neighbor kid who used to do my computer stuff won’t talk to me because I put too many politics memes on his Facebook wall! You gotta help me!”

Haha, is it a good idea, Gabe? Is it an idea you in fact suggested to him literally two sentences earlier in this very conversation? How dumb do you think we are exactly, Gabe?