“Heh heh, if there’s one thing dudes like, it’s football, and the NFL playoffs, am I right? And if there’s one thing ladies like, it’s shopping, using credit cards. You can use credit cards in two stores a day, right? I’m pretty sure that’s how credit cards work? I tried to look it up online but there was all sorts of complicated stuff about interest rates and interchange fees and whatnot? It was confusing. The NFL playoffs are at least blessedly simple. I mean, they’re not, I don’t really understand how the teams are seeded, but there are definitely two games today and two games tomorrow. I’m just hoping credit cards work on the same principles.”

Ha ha, it’s funny because he feels that the coercive and violent power of the state with which he’s been imbued applies in his domestic sphere as well, and believes, probably with some justification, that his fellow law enforcement officers will look the other way when he threatens his wife! Never have the patented Shoe Goggle Eyes of Horror been so appropriate. 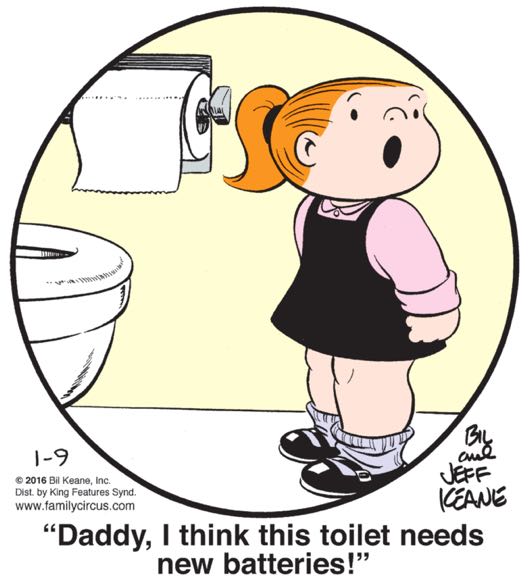 Just to make this joke absolutely clear: Dolly, a child of the electronic age, views any instance of a machine not working as a symptom of it “needing new batteries.” (Actually, an real child Dolly’s age would probably say it “needs to be recharged,” but I digress.) So in other words, that toilet isn’t working correctly. And since the only thing a toilet does is flush, we can assume that in this case, it failed to flush properly. There’s pee or, more likely, poop in that toilet right now, is what I’m saying. Just a big old Keane turd, which Dolly is clenching her fists and backing away from. GO AHEAD, GRANDMAS EVERYWHERE, HANG THIS DISGUSTING SCAT PORN ON YOUR REFRIGERATOR. I DARE YOU.