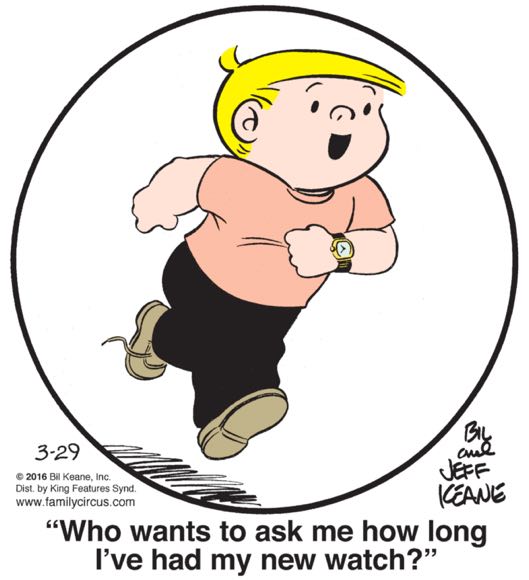 I’m usually pretty meh on the art in the Family Circus. Still, the trailing shoelace in today’s panel is a nice idea, despite the fact that those shoes look to be loafers and the lace is sort of emerging out of nowhere. It gives a nice air of childhood whimsy and innocence to the drawing; it also gives hardcore Billy haters like myself hope that he’s soon going to trip and break a tooth, or, even better, his watch.

Tom Batiuk famously writes Funky Winkerbean almost a year in advance, which I assume is also true for Crankshaft. So it’s actually just a total coincidence that this storyline is running the same week a guy in North Carolina was stopped because he had a broken taillight and then literally handcuffed and taken to jail for not returning Freddy Got Fingered to his local video store in 2002. (The local video store, I think it goes without saying, closed down years ago.) Anyway, if we live in an absurd world where decades-old civil judgements for very small amounts of money can lead to actual arrest, maybe you should be careful, Lillian! The cops in the North Carolina case were nice enough to let the guy drop his daughter off at school first, but they didn’t have to! Probably they could just drag Lillian off to jail and leave the twins in the car, miles from anywhere. (Is Lillian even supposed to be driving these kids around?)

Looks like Dawn’s starting to make a bolder personal effort at school! Step one: just don’t do things you don’t want to do! If she were being a little bolder, she just would’ve said “Nahh, not my scene. Later, blondie!” But this is definitely an improvement over signing up and pretending to enjoy it.

“…what if I looked him up … on the Internet? And so I did. He’s got a Wikipedia page. Turns out he’s dead! Cool story, huh?”