You might not believe it based on the nonstop stream of cruel vitriol I heap upon comics creators daily, but writing this blog over the years has actually given me a lot of sympathy for the people who write these things. Coming up with a joke a day within the same little world, every day, for years and years is hard, man, even for the team of people they have down at ol’ Walker-Browne Amalgamated Humor Industries LLC. I mean, I get it. Some days you’re just staring at a blank panel and are trying to figure out how you can wring a few laughs out of it, and clearly, as the deadline loomed, today’s jokesmith could think of nothing except for falling off a cliff into the sweet embrace of death, which might be something they should talk to a trained therapist about. But anyway, I’d argue that the second panel here is wholly unnecessary. Beetle and Killer dully contemplating the fact that their fellow soldiers just can’t stop falling off cliffs, while staring at a handwritten note on a bulletin board that, in a plea for sanity that will surely go unheeded, urges everyone to “AVOID CLIFF”, is the funniest thing in the comics today, and probably the funniest thing to happen in Beetle Bailey ever.

Boy, the softball action in Gil Thorp sure is a lot more exciting when it’s drawn like an German expressionist film, right? Pitcher and catcher stand at opposite ends of some long corridor, then suddenly are practically on top of one another, representing the way the emotional space between us can sometimes collapse into sudden moments of terrifying intimacy. 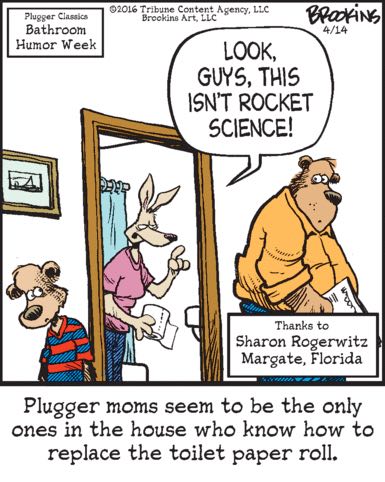 The look of profound shame on those he-pluggers’ faces makes me think that the caption to this panel should actually be “plugger moms seem to be the only ones in the house who actually use toilet paper.”