If there’s one thing we associate with Dick Tracy, it’s gruesome, authoritarian violence, but if there’s one other thing we associate with Dick Tracy, it’s oddly-shaped criminals with really on-the-nose names. But generally those names have at least a bit of fun wordplay involved. Like Professor Glitch! See, because he works with computers, and computers have glitches, sometimes! Or Matty Squared, who appears to be some kind of artificial intelligence housed in a basically square casing! That’s why I’m actively offended by the current boss of the strip’s bad guy hierarchy, Mr. Bribery. See, they call him that because he … bribes people? I assume? I actually don’t think we’ve ever seen him bribe anybody. Is supposed to be … ironic? Maybe? 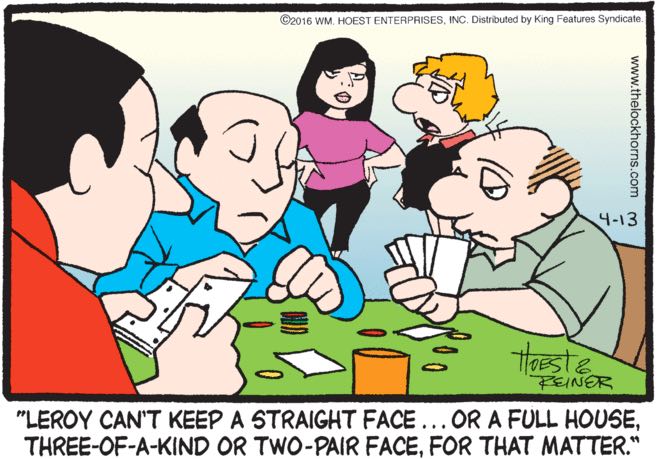 I’m pretty sure that this joke would work better if Leroy were actually smiling. But then, this may just be a case where Loretta’s long experience with Leroy’s misery blinds her to what others see. She can parse where Leroy is on his emotional spectrum, which ranges from “suicidally miserable” to “briefly capable of seeing how a third party might enjoy my life as an ironic farce,” but to everyone else, a crumplefrown is just a crumplefrown.

HARLAN JONES IS HETEROSEXUAL, BEREAVED, AND OWNS AN ADORABLE DOG

(the less said about this strip’s first-ever attempt to depict Dawn’s boobs, and to do so from a “dog’s-eye view,” the better)