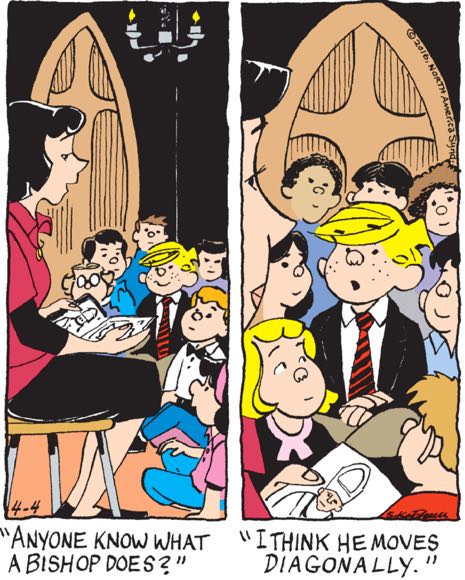 The Mitchells strike me as an extremely 1950s respectable upper middle class types, which means that they’re probably high church Episcopalians. Certainly they’re not going to be Catholics, or members of one of those “ethnic” Orthodox churches. (Yes, I know other denominations have bishops, but I don’t think any of them wear mitres as in the picture here.) Anyway, this panel suffers the same problem of a lot of Dennis-says-the-darndest-things-in-class gags, which is that it’s not clear at all what the correct answer to this extremely open-ended question is supposed to be. Are these eight-year-olds supposed to describe the bureaucracy of church governance, or talk about Apostolic succession or the long struggle in the 16th and 17th centuries over whether the English church should have an episcopal or presbyterian structure? Give me a break. Also, a child demonstrating knowledge of how chess works is one of the least menacing things I can think of.

Oh, shoot, I haven’t been keeping you up to date on Spider-Man, because it’s been all about the mildly superheroic tussling amongst Spidey, Steve Strange, and the sinister Xandu, and not about, say, supervillains memorializing their triumphs via selfie. My favorite part is how the mind-controlled Spider-Man is desperate to stop Xandu from uploading this photo to Instagram, but cannot. What would he do if he weren’t under Xandu’s spell? Post a 2,000-word screed to Medium about how selfies are a symptom of a narcissistic civilization in decline?

Have you ever wondered about the sexual scenarios that Crankshaft claims to be disgusted by and yet can’t stop visualizing? Then today’s strip is for you, my friend.