Marvin is obviously the most loathsome character in the comic strip Marvin by a long ways. But let’s not forget that his smug terrible father is no prize either! Jeff appears to be the primary breadwinner for his household of four adults and an infant; Marvin’s mother apparently used to be a romance novelist but now is incapable of feeling anything but a sort of dull numbness, and now has to resort to churning out short-form humor content for cash, which, believe me, isn’t all that lucrative. Plus I think Marvin’s grandfather is a Wal-Mart greeter or something? At any rate, Jeff’s generic white-collar office job presumably provides the bulk of the family’s income plus its health insurance coverage, which is why he maybe should’ve thought twice before embezzling from the company! I was about to express glee about the Miller family’s downward spiral into poverty and shame, but then I realized that this will give the strip opportunities for jokes about desperately trying to save money by somehow washing Marvin’s foul diapers, so never mind.

Remember, whether it’s Sophie spying on Neddy making out with some boy who I don’t remember and cheerfully asking about “that tongue thing,” or Sam and Abbey watching from the shadows with mounting excitement as Neddy says a lingering goodnight to some boy who I don’t remember, or Sam and Abbey trying to analyze Neddy’s degree of sexual satisfaction as she comes home after sunup from a night with a boy who I someday won’t remember, one thing is clear: living vicariously through Neddy’s erotic life is one of the Spencer-Driver family’s top pastimes, just behind being given money for no reason. 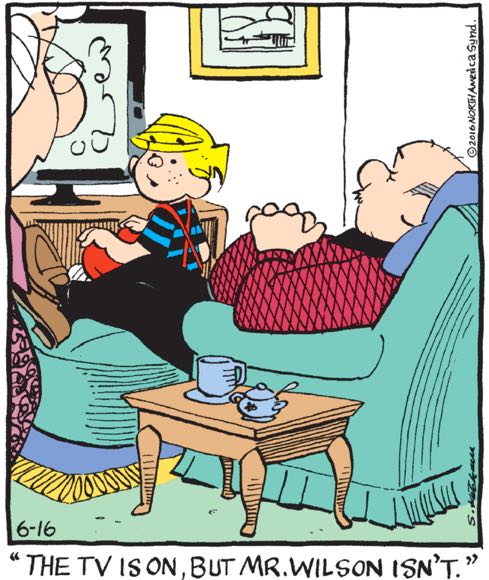 Say what you will about Dennis, but this is a pretty darn menacing way to let a woman know that her husband of many years just died in front of the TV.