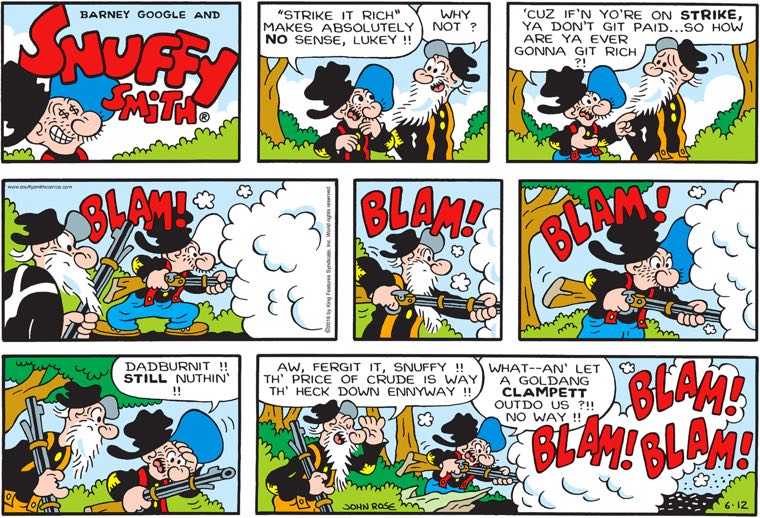 Guys, I spent a lot more time than I’m comfortable with trying to figure out what exactly in God’s name is going on here. It took me a while to make the leap from the anti-union propaganda in the throwaway panels to the Clampetts, who I had forgotten were the titular oil-rich Beverly Hillbillies. While I’ve never actually seen an episode of the show (side note: there are 274 of them), I understand from the theme song lyrics that Jed Clampett became a petro-millionaire after he stumbled upon oil seeping out of the ground while he was “shootin’ at some food.” Snuffy and Lukey seem to be engaged in some cargo cult oil exploration, unaware that the mineral rights to everything under Hootin’ Holler were sold to a Halliburton subsidiary years ago.

I take it back, OK? I take back what I said about the new writer stopping the nonstop flow of cash into the Morgans’ bank accounts/sock drawers/comical burlap sacks with dollar signs on the side of them. That kind of thing does happen (to the Morgans), and it’s going to keep on happening, forever.

Check it out: Shady’s down there looking for his lost jewels without the fancy underwater breathing apparatus Slylock and Max have. That’s why he always stays one step ahead, even when they foil his plots: he works harder and does more with less. You’ll never take him alive, coppers! Probably because he’s about to drown.