I don’t want to engage in any stereotyping, but my understanding is that Japan is a more reserved and stoic culture than the United States. Thus, I would have to assume that those in Japan who survived the terrible tragedies of the earthquake, tsunami, and nuclear accident would like few things less than to have some American lunge at them in sympathy, Wilbur style, and try to get them to emote for “I Shouldn’t Be Alive!”, his terrible and widely syndicated newspaper column. Anyway, pretty much all you need to know about Mary Worth is that our upcoming storyline is much less likely to be “Wilbur rambles around Japan re-traumatizing earthquake victims” and more likely to be “Mary replies to someone who wrote into a newspaper advice column.” 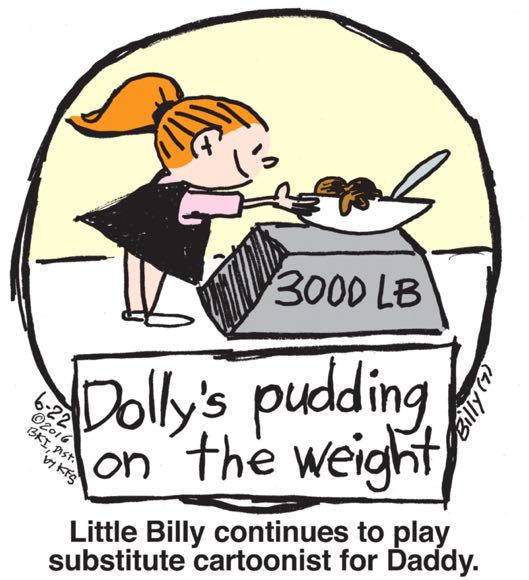 The “Billy subs for his dad on Fathers Day” bit has a long and storied history in the Family Circus, but does it usually last an entire week? Anyway, the layers of metafiction in these exercises are always exhausting — like, grown-up Jeff Keane is pretending to be the 7-year-old version of his real-life brother subbing for their father, who died in 2011 — and this strip just adds some messed up family dynamics to the mix. “No, it was Billy who made a crude fat joke about your child-self, Dolly! Billy, age 7!”

Looks like Kit Jr. (or Kit XXIII, I guess) will be spending the next four years in Tibet, cut off from his home and family. So at his goodbye party, he’s enjoying the sort of Bangallan treat he’ll be missing: a raw unpeeled potato, fresh from the bowl!