I guess the point of the first panel is that it Beetle needs to get this aphorism from somewhere outside himself, because otherwise why hasn’t he been putting it to use in his own life before? But where could he have heard it, I wonder? If anyone involved in the creation of Beetle Bailey had ever used a computer, maybe Beetle would be browsing a Facebook group called Extremely Insipid Memes That Are Affiliated With A Radio Station For Reasons That Are Not Entirely Clear, but as it is, we’ve just got to go with the next-best idea: he got it from a four-page pamphlet with nothing on the cover. Makes sense!

Haha, yes, Abbey, your daughter’s dream of rock stardom are silly and should be quickly discarded! Now let’s continue helping your husband put endless identical law books that he’ll never look at up on the shelf of his new pretend office that still reeks of horse shit. 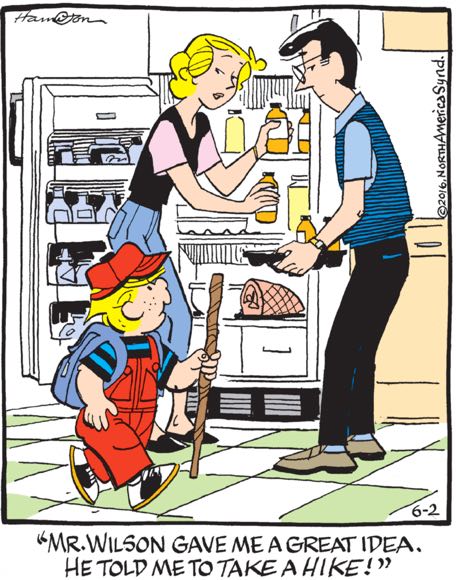 The Mitchells are a typical American family, and today’s Dennis the Menace offers a glimpse at what’s inside the typical American refrigerator: glass bottles of various sizes containing orange liquid, a carton of eggs (?), and an entire uncovered bone-in ham.