I love the idea of an Ant-Man who is 100% fed up with any kind of mystifying legends or penumbra around superheroes and villains. “Look, my name’s Scott, Egghead’s name is Elihas, yours is … well, you didn’t tell me, even though I teed up a perfect opportunity for you to do that, and I think that’s kind of rude, but let’s not dwell on it. Anyway, we’re just … we’re just people, OK? People with regular people names. I’m just an ordinary guy, who happens to be able to shrink down to ant size and is wearing a helmet with … God, I don’t even know. I guess those things coming out from my ears are supposed to represent an ant’s mandibles? Except what’s in between them? Like, an olive or something? The whole thing’s absurd. Please, call me Scott, it’s the only thing that tethers me to reality at this point.”

I guess, if you’re reading Funky Winkerbean and care enough to squint to see the small text at the bottom of the first panel, you probably already have enough information to properly interpret it: In a couple of weeks, a Rotary Club in Mentor (a suburb in the Cleveland area, which is the home of Tom Batuik and the setting of the Funkyverse strips) is having a “Lisa’s Legacy” run, a real-life version of the in-strip fundraiser/tribute to a character who died of breast cancer, nine years ago. But imagine that you’re trying to parse this without any of that background. It would read like the stuff on some numbers station. “Mentor? Rotary? 9/11? Sir, I believe we’ve intercepted a warning of an impending catastrophic attack.” 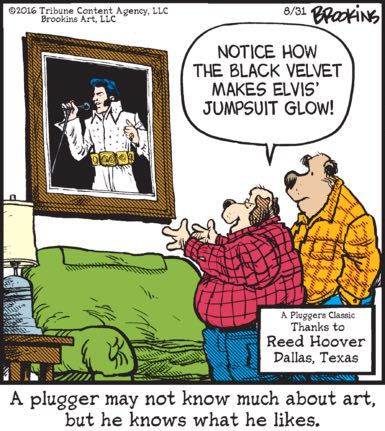 I’m gonna spend a lot of time thinking about the fact that in this panel Elvis is depicted as fully human and not a half-animal beast-man like everyone else in this strip. Is it any wonder they worship his image as their God?