It’s been years since puberty transformed Sophie from a data-obsessing pantsuit-wearing tween genius into a mean girl super-cheerleader. But while she’s been curating her affect for maximum acceptability in school, her core identity — rational, calculating, steel-willed — remains intact. Her plan to win Derek’s heart has been carefully crafted from the beginning. Wars interest her. And today, she’s going to self-talk her way out of a wrecked car. “This is not how you bleed, Sophie. This is not how you die. This may be how Honey Ballinger dies, though. Just move that shoulder belt a few inches to upwards, so it her throat rests right on it with all her weight … she won’t even feel a thing…”

Liberal whiners in the U.S. are always extolling European health care systems, but real American Dick Tracy is here to show us the reality. If he had suffered his injuries in America, right now he’d be in a gleaming new for-profit hospital, but he’s in Switzerland, so he’s getting the best care they have on offer, which is in the home office of some dude who isn’t assertive enough to get rid of his houseguests. 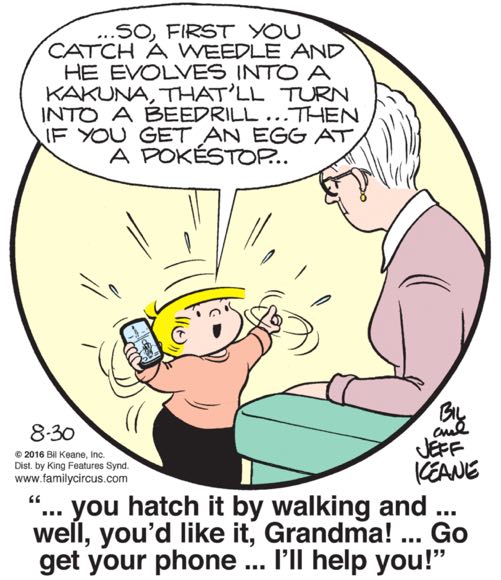 Wow, so I guess we’re getting a whole week of this, huh? You know, most comics are going broke, and Garfield has never been anything but a marketing vehicle, but I’m kind of surprised that the Family Circus is the first syndicated comic to offer native advertising.