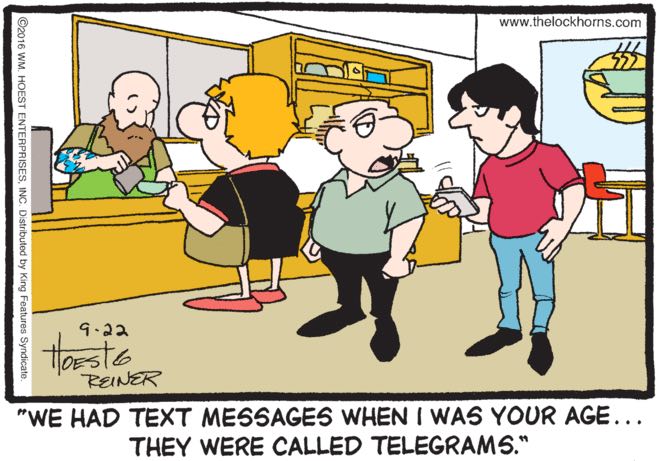 It’s actually pretty complicated trying to figure out how old someone is in a legacy comic strip, because you have to juggle a variety of narrative, cultural, and personal cues. Take the title hell-couple in the Lockhorns: they’re a long-time married couple still of working age, so probably no younger than 35 and no older than 55. That’s a span I’m right in the middle of! The seem older to me, because I’ve been reading The Lockhorns on and off since I was a child, plus their character design has been more or less set since they debuted almost 50 years ago, but today’s Leroy Lockhorn, the one who coexists with up-to-the-minute hipster stereotypes like our barista here, came of age in the 1960s at the very earliest. He has never sent or received a telegram in his life. And if he’s like literally every 35-to-55-year-old person I know, he sends text messages all the time. Basically Loretta can’t turn her back on him for more than 15 seconds before he starts just being a dick to someone for no reason.

At last, we’ve found out the relevance of this island makeout session from two years ago (strip time)/eleven weeks ago (real time): this couple brought invasive fire ants with them, as passengers on the firewood they burned to warm their writhing bodies. Fortunately, the U.S. Department of Agriculture keeps a meticulous log of the movement of every vessel everywhere on the seas, and was able to track down the culprits. After twenty hours of interrogation in a black-site USDA detention center in an unnamed Balkan country, our nautical lovebirds confessed to their woodcrime and will, after a tearful hour-long self-criticism session on TV, be sent to the labor camps where all Invasive Species Enablers are detained indefinitely until the War On Gross Bugs finally ends in victory.